Cameron Aggies’ road trip takes them to the Last Frontier 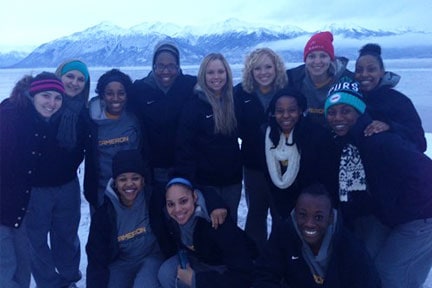 Think it was cold where you are when you woke up in Oklahoma this morning?

All this weather is doing is letting the Cameron Aggies feel like they’re bringing back a little piece of Alaska with them.

The Cameron women’s basketball team headed up to Anchorage, Alaska, on Tuesday to participate in the Seawolves’ ATT Hoops Classic.  When they got there – 4:15 local time (Alaskan Standard Time, a three-hour difference from Central Standard Time) – it was already dark.  Coach Tom Webb and his entourage got to experience weather with a chill that Oklahoma rarely gets.

He and his team raised all of the funds to make the trip that benefits the program on many levels.

“It’s a situation where I think that A) it helps in recruiting,” Webb said.  “And B) we’re taking young ladies from the south who have never been to Alaska or seen mountains and snow like this and they get to experience it. And it may be a once in a lifetime event for every single person in this party.

“That’s a good thing.  And that’s what I believe college athletics is about.  It’s the experiences.  It certainly is about experiencing things both on and off the floor with adversity and fighting through and it’s the same thing when you get to travel the states and see different things that you’ve never seen.  And that part’s great.”

As for the basketball portion of it, the Aggies (7-2) suffered an 86-70 defeat at the hands of the hosts.

“We played a really good basketball team last night in Alaska-Anchorage and it was a heck of a war all night,” Webb said.  “And we learned a lot of things about ourselves.  I’m proud of this group and I know right now that this group can be really good.”

The Aggies play Brevard in the consolation side of the bracket tonight at 8 p.m. CST.

“Brevard plays a little different style pace with a little 1-2-2 halfcourt zone.  But we’re going to press and fly around and see which team has better legs.”

These games don’t show up on the schedule every year, but the benefits of trips like this seem to warrant planning with some regularity.

“You know, if you can do this once every four years, that would be great because most of your kids then would get to experience it,” Webb said.  “We went to Florida last year and that was a good experience, too, and the kids got to see South Beach and some different things.”

Naturally there is a No. 1 request.

“And of course, everyone wants to go to the destination of Hawai’i.”

The Aggies aren’t alone and a couple of Oklahoma teams made the journey this academic year.  Oklahoma Christian took the women’s basketball team over the Thanksgiving break and East Central’s volleyball squad visited the Aloha State to open its season.

For now, there is one more game in the Last Frontier before the Aggies take the red eye flight back to Oklahoma.  And at least they will be prepared for what will meet them when they arrive.

“That’s the scary part is that someone said it’s going to be cold when we get back.  We were trying to get out of it.”