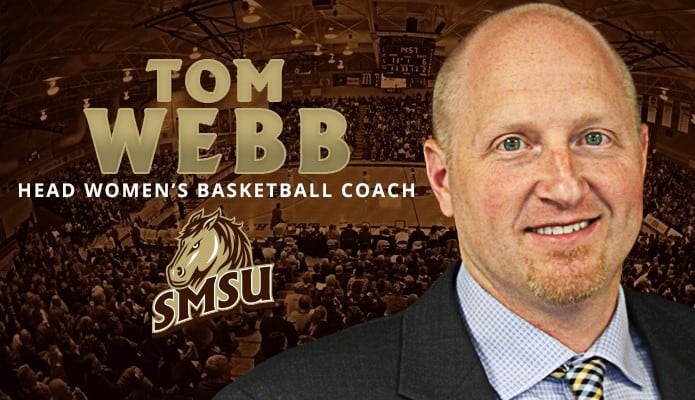 Webb becomes the eighth head coach in the 48-year history of the program and takes over for Allison Kruger, who announced her resignation on March 29 after six seasons as head coach.

A press conference to formally introduce Webb will be held in two weeks.

“Tom will bring a well-rounded coaching background that centers on the importance of student-athlete academic and athletic success, civic engagement and the development of a disciplined and structured basketball program,” Hmielewski said. “His coaching philosophy focuses on developing a women’s basketball team that embodies excellence in all aspects of the program. He stressed the importance of student-athlete and team characteristics such as; trust, humility, passion, collective responsibility, communication and unity.”

Webb has spent the past eight seasons (2008-16) as the head coach at NCAA Division II Cameron University in Lawton, Okla., recording a career mark of 91-123. He took over a program that had won just eight combined games, including three in conference play, the two seasons prior to taking over.

“I would like to thank President Dr. Connie J. Gores, Director of Athletics Chris Hmielewski, and the search committee for the opportunity to come back to the University that has given me so much,” Webb said. “President Gores and Mr. Hmielewski have done an outstanding job in creating an environment at SMSU that will allow our basketball program to recruit the highest caliber student-athletes. We will recruit student-athletes that will excel on the floor, in the classroom and in the community.”

During the 2014-15 campaign, Webb led Cameron to one of its best seasons in school history, earning an at-large bid to the NCAA tournament. The Aggies finished with an overall record of 15-12, including a 12-4 record in the Lone Star Conference—the most LSC victories in team history. For his efforts, Webb was named the LSC Coach of the Year. This past season, Cameron finished 15-11 overall and placed fifth in the LSC with a record of 9-7.

“I would also like to thank Cameron University for the opportunity they gave myself and my wife eight years ago,” Webb said. “Without that opportunity this would not be possible.”

Prior to Cameron, Webb spent four seasons as an assistant coach at NCAA Division I Eastern Washington University (2004-08). He served as recruiting coordinator and oversaw the post players, with four earning all-conference honors; while one went on to play professional basketball in Europe. He was promoted to associate head coach prior to the 2007-08 season. He helped recruit and coach two EWU players who later earned Big Sky Conference MVP honors during their careers.

Webb earned his first head coaching position at Northwest College in Powell, Wyo., in 2000. He spent four seasons (2000-04) as head coach, leading the Trappers to a 94-32 overall record and a pair of conference titles. The team set a school record with 26 victories in back-to-back seasons, while his career .750 winning percentage is the highest in school history. He twice was named Wyoming Community College Athletic Conference (WCCAC) Coach of the Year.

The Trappers had success in the classroom as well, earning the 2003 National Junior College Athletics Association (NJCAA) academic championship with a team GPA of 3.56.

Webb began his coaching career as a student assistant women’s basketball coach at SMSU in 1998-99, before serving as a graduate assistant for the Northern State University men’s basketball program in 1999-2000.

“I’m extremely excited for the opportunity to be the next head coach at my alma mater,” Webb said. “I’m looking forward to working with the student-athletes in the women’s basketball program as well as the wonderful people in Marshall and SMSU. My family and I are beyond excited to call SMSU and the Marshall community home.”

Southwest Minnesota State University, located in Marshall, is a member of NCAA Division II and competes in the Northern Sun Intercollegiate Conference.  SMSU finished 5-24 overall this past season, including 3-19 in the NSIC.