Canute too much for CBA in West Central consolation semi 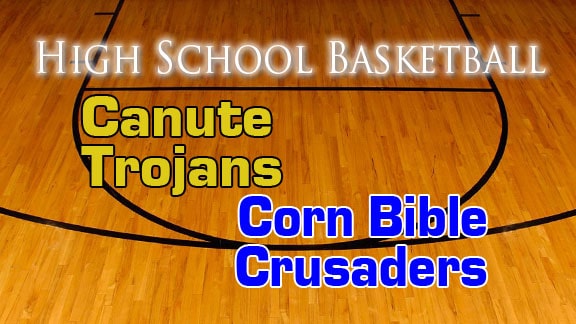 Riding Baylee Frederick’s hot hand from deep, the Canute Trojanettes stormed past Corn Bible Academy 54-31 in the consolation semifinal of the West Central Tournament inside the Pioneer Cellular Event Center on Friday night.

The first quarter of play was a closely contested match-up between Canute and the Lady Crusaders. Cassidy Listak for CBA was dialed in from the start, knocking down four shots to account for all eight of her team’s points. On the other side of the court, the Trojanettes featured a more balanced attack that was led by freshman Tatum Rouse with four points.

For the majority of the second frame the teams stayed close, with CBA still in the game. Listak notched another two points before the rest of the Lady Crusaders’ offense got rolling. However, Frederick and Kaitlin Farni combined for four treys, including three straight, to create a comfortable gap. The Trojanettes went into the locker room up 27-17.

It was the third quarter that proved the difference, with Corn Bible struggling to get anything going on offense throughout the first 7:04 after play resumed. This time it was Gillian Snowder who took advantage, pouring in eight of her joint game-high 15 points in the frame. Halle Penner finally found the bottom of the basket for the Lady Crusaders with 56 seconds left. That was followed by a Laura Marrufo conversion moments later, but the damage was done as Canute went into the fourth quarter with a 43-21 lead.

Headed into the fourth quarter, all Canute had to do was manage the game, and they did so to tremendous effect outscoring CBA 11-8. The eagle-eyed Frederick knocked down her fifth make from downtown on the night, while Snowder and Tristten Ray chipped in with four points each. Penner did well finishing from close for two makes, but the lead proved insurmountable with Canute emerging victorious at the buzzer.

Frederick and Snowder tied for a game-high 15 points in the victory for the Trojanettes while Farni provided 11 points of her own. For CBA, Listak led the way with 14 points. Penner and Marrufo each finished with six points.

Both teams will play one final game tomorrow, with Canute advancing to the consolation final with the victory.