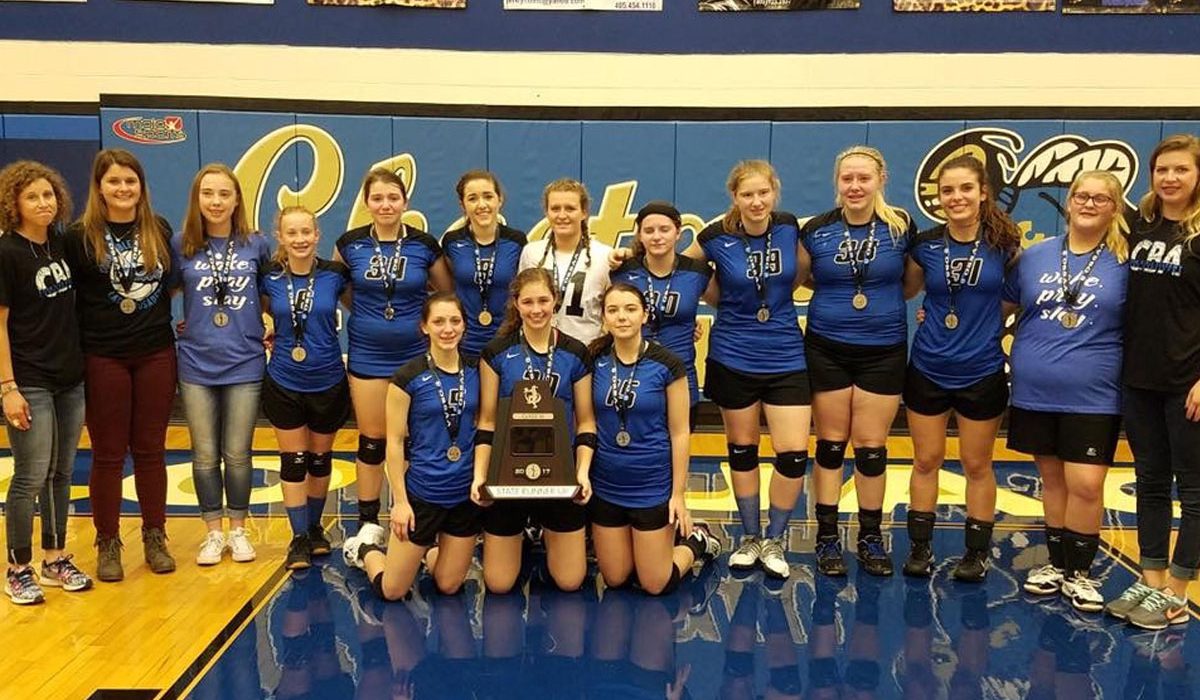 Following a weekend of intense and dramatic competition, the Corn Bible Academy volleyball team returned home as the runner-up of the Class 3A State Tournament. In addition, seniors Halle Penner and Mikayla Nelson both were named to the All-Tournament team.

With a 26-5 record on the season, the No. 1 seeded Lady Crusaders faced No. 8 Southwest Covenant in the first round of the tournament at Deer Creek on Friday. CBA jumped to an early 11-3 lead in the first set. Undeterred, the Patriots quickly made up ground by mounting a massive run to tie the set at 14. Unable to regain momentum, CBA lost the set 22-25. The second set played out almost identical to the first, with CBA once again losing 22-25.

Facing elimination and an early bus ride home, the Lady Crusaders dug deep to overcome Southwest Covenant, but CBA continued to struggle to score against the incredibly athletic and long-reaching Patriots. The set remained neck-and-neck to the final stretch, with Corn down 23-24, when the most pivotal point of CBA’s season occurred. The Patriots set up a perfect set and kill to win the game 25-23, but a penalty was called on the Patriots for touching the net, therefore giving the point to CBA for a tied score of 24. Filled with new energy, the Lady Crusaders quickly scored the following two points to win the set and force a fourth.

Determined to take advantage of the fortunate ending of the previous set, the Lady Crusaders dominated the shaken and stunned Patriots to win 25-17 and advance to the final set of the game. Both teams performed at top level, but it was CBA that ultimately emerged victorious by a score of 17-15. After two-and-a-half hours of vigorous competition, the game had finally come to an end.

“God was totally with us our first game,” senior Mikayla Nelson said. “I honestly believe that we shouldn’t have made it past the first round of the state tournament.”

Nelson led the team in assists with 40 and recorded 12 kills during the first game. Other key players were junior Kimberly Javorsky with 25 digs, and senior Halle Penner with 22 digs and 18 kills.

With the win, CBA advanced to play Chisholm the following morning in Choctaw. Following 45 minutes of fierce volleyball, the teams split the first two sets, with CBA winning the first 25-20 and losing the second 20-25. The Lady Crusaders, however, mercilessly took advantage of a tired and error-ridden Chisholm team to take the third set 25-10. Chisholm, however, refused to give up, beating CBA 25-23 in the fourth, but Corn once again prevailed in the final set by a score of 15-12.

“We definitely did not have it easy, and we played our hearts out,” reflected Nelson, who recorded 41 assists and 22 digs. Halle Penner once again led in kills with 20, followed by sophomore Reagan Russell with 12.

After roughly a four-hour break, the Lady Crusaders resumed action in the championship game against Crossings Christian. Fatigued and disoriented, CBA dropped the first two sets 19-25 and 10-25. Once again facing elimination in the third set, CBA’s coach Erin Basinger made slight changes in her team’s lineup and rotation to help defend against Crossings’ powerful offense. From the outset, the Crusaders played unified, keeping up with Crossings until the end of the set when CBA faced a threatening 19-24 deficit. During what might have been the last point of the day, one of the Lady Crusaders spiked the ball out-of-bounds, but Crossings was called for a tipped ball, once again swinging momentum to the side of CBA. The Lady Crusaders dominated the final stretch, scoring six more points in a row to win the game 26-24.

Spurred on with new hope, CBA capitalized on Crossings Christian’s state of shock for a solid 25-19 win. Unfortunately, the Lady Crusaders found themselves down 0-4 at the beginning of the final set. Although they battled until the end, the team was unable to recover from the early deficit, ultimately falling 7-15.

Despite the loss, the team handled the outcome with joy for their incredible resilience displayed throughout the weekend.

“I’m so proud of how the team never gave up and how they worked together to do things no one thought was possible,” Coach Erin Basinger said. “I received many compliments on their determination and respectful attitudes. They used the stage they were given to glorify God with the talents He’s blessed them with.”

“This season has been one that I will never forget. I wouldn’t have wanted it to end any other way or with any other group of girls by my side,” added senior Ashli Bradford. “I’m so thankful for the opportunity that God has given me to be a part of this team.”

The Lady Crusaders achieved a huge milestone for CBA by becoming the only team in school history to appear in the volleyball state championship. Along with this team achievement, seniors Mikayla Nelson and Halle Penner were named to the All-Tournament team on Saturday night following the conclusion of the games.

“I am so proud of this team; we fought until the end,” Penner said. “Every girl on the team shares the same passion for winning and loves volleyball, and that really came out during the games. I am forever proud to be a Lady Crusader.”