Crimson Storm in NCAA provisional year with “something to compete for” 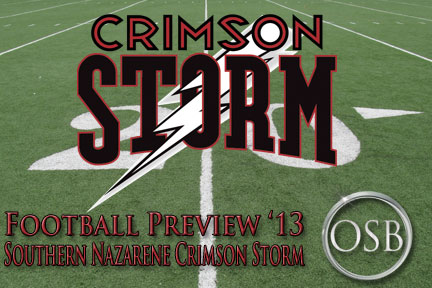 Since being accepted into the process of moving from the NAIA to NCAA Division II, Southern Nazarene’s football program has seen the best of times and the worst of times.

In 2011, the first year of the three-year trek, SNU went 9-3 and finished with the best record in school history and a trip to the NAIA playoffs.

But in 2012, NCAA growing pains caught up with the Crimson Storm.  SNU played new and unfamiliar D-II opponents and had a schedule that featured nine games on the road.  They went 2-9, the worst winning percentage for head coach Mike Cochran in his tenure in Bethany.

But Southern Nazarene has received the go-ahead from the NCAA to move into the Provisional Year (the third and final year) of the process and Cochran’s squad can build off both experiences.

“Our guys really competed and lost a lot of close ballgames,” Cochran said.  “I like the character of this group and how they battle and complete.

“And I think it will do nothing but help getting to play five home games this year.”

Southern Nazarene will get to play the full 10-game Great American Conference schedule in 2013.

The Crimson Storm lose their leading rusher and leading receiver from last year’s squad. But the signal caller is back for his senior campaign.

Dylan Terry threw for 1,860 yards and 16 touchdowns in 2012, but will be getting the ball into the hands of different player in 2013.  Cochran said that was typical with the scheme being run in Bethany.

“This offense is designed to have multiple playmakers and multiple people involved,” Cochran said.  “There were guys last year who were playmakers for us who will just get more opportunities this year.

“There’s a lot of experience coming back.  We had a young running back returning that I think will do some great things in the conference.”

Sophomore Chris Hunter was second on last year’s squad in carries and yards, picking up more than 40 ypg.

Some of that experience Cochran referred to comes from the receiving corps.  Seniors Jarod Martin and Jakeil Everhart combined for more than 500 yards receiving and should get a chance to shine.

At 6-foot-4, 299, Garrett Kruse brings size to the right side of the Storm offensive line.  Juniors Mike Edwards and Ethan Feuerborn are also returning to bring protection up front.

Linebacker Michael Hicks will be a junior this season and again headlines the Crimson Storm defense.  Hicks was an honorable mention all-conference player and was second on the team in tackles (90) in 2012, though sidelined with an injury and did not finish the season on the field.

“I’m excited about our entire linebacking core,” Cochran said.  “We have three linebackers that have started for us and they will all be back.  They’re an excellent group.  Michael is the most seasoned of the group, but I’m looking forward to seeing how they perform.”

Senior Blake Cavill and sophomore Chris Hudson should also see time in the middle of the defense.

“Defensively we return nine starters and that makes a big difference.  Those guys have experience against some of the teams we’ll be playing.”

Among those are senior defensive linemen Christo Lisika, who led the GAC in tackles for loss (18.0), and Jake Garrett, who was named “The Man” in a university-wide competition. Senior Stan West can be a factor in the Storm secondary.

Southern Nazarene was picked last in the 11-team league in the preseason coaches’ poll.

“We won’t place a big emphasis on that because our goal is to be the best football team we can be every single week and to get better throughout the year,” Cochran said.

“I’ve been first in a bunch of preseason polls and those didn’t count.  Neither do the ones in which you’re picked last.”

Cochran noted that the action on the field is the important thing and also mentioned that the experience of playing the conference foes before will put his team in a better position than it was last season.

“It always does.  The more familiar you are with the competition, the better you will be able to prepare.  Without a doubt, that will be an advantage.”

And now that his program is in its third year of the NCAA process, the Crimson Storm are eligible to challenge for the Great American Conference title, another plus for SNU.

“It’s always good to have something to compete for, whether it’s a championship or the postseason.  And so to have that back in front of us is a great thing and we’re looking forward to being in the mix like everybody else.”

The Storm gets the season underway Sept. 7, at Arkadelphia against the team unanimously picked to win the GAC, Henderson State.  The home opener is the next weekend, Sept. 14, as SNU hosts Ouachita Baptist.