Dicus out at season’s end, Renault will step in at RSU 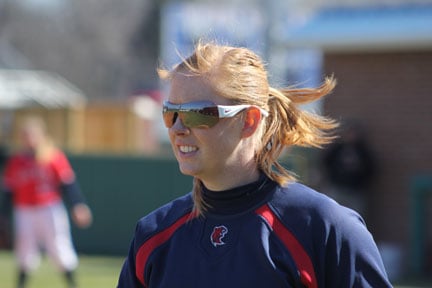 Rogers State head softball coach Mark Dicus announced Monday that this season would be his final one at the helm of the program.

But no national search for a new head coach in Claremore.  RSU Athletic Director Ryan Bradley was ready to make that call.

On Tuesday, current assistant coach Amy Renault was named to be the new head coach, to take effect for the 2013-2014 season.

Renault had worked with Dicus as a member of his staff all five years that Dicus led the program.

“I am excited for the opportunity to lead the Rogers State softball program and continue the tradition and success that has already been created,” Renault said.

“I am very appreciative to our University administration and Athletics Director Ryan Bradley for their support. I would also like to thank Coach Dicus, who I have worked alongside for the last five years and gave me my start at Rogers State. I am looking forward to the great things to come in the future.”

Renault is a native of Claremore, but played college softball in Chickasha at USAO.

Dicus has, to this point, compiled a record of 170-113, with his teams winning at least 30 games each season.  The Hillcats opened this season with a 30-game winning streak.

RSU is 38-9 and 11-7 in the Sooner Athletic Conference, tied for third with St. Gregory’s.

The SAC Tournament is set to be played May 3-4.