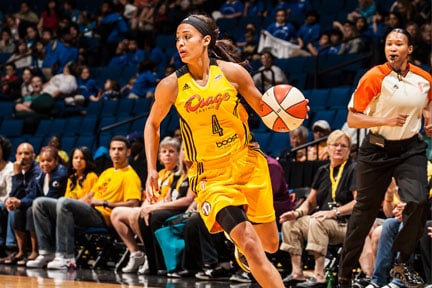 NEW YORK – Skylar Diggins of the Tulsa Shock and Alex Bentley of the Connecticut Sun were named the WNBA’s Western and Eastern Conference Players of the Week, respectively, for games played June 9 through June 15.  The award is the first for each player during their respective WNBA careers.
Diggins, the No. 3 overall selection in the 2013 WNBA Draft presented by State Farm, led Tulsa to a 3-0 mark for the week.  That effort extended the Shock’s winning streak to four games, the longest since the club moved to Tulsa prior to the 2010 season, and improved the club’s 2014 record to 4-5. The second-year pro paced the Western Conference in scoring (23 ppg) and minutes (35.9 mpg), while ranking seventh in both assists (4.3 apg) and three-point field goal percentage (.444, 4-of-9 from behind the arc).

Diggins began her week by registering 21 points, seven assists and three boards in Tulsa’s 72-57 home win over the New York Liberty.  She then poured in a game-high 22 points to go along with four assists, two rebounds, and a pair of steals as the Shock toppled the visiting Los Angeles Sparks, 69-67.  In that game, Diggins hit a basket with 42.4 seconds left to play and then drilled a game-winning jumper with 1.9 remaining on the clock. The former Notre Dame star closed out the week with a big effort in an 85-79 home win over the Seattle Storm in which she tallied a game-high and career-high 26 points.  Five of those points came during Tulsa’s 9-0 run late in the game that put the Shock ahead, 83-77.
On the season, Diggins ranks fourth in the WNBA in both scoring (19.2 ppg) and assists (5.7 apg).
Bentley, a second-round pick of the Atlanta Dream a year ago and a member of the 2013 WNBA All-Rookie Team after setting a league record with 10 consecutive three-pointers, was traded first to the Washington Mystics on March 12 and then to the Sun later that same day.
The former Penn State star led Connecticut (6-6 overall) to a 3-0 mark for the week and began her own impressive three-game stretch by leading the Sun past the visiting Phoenix Mercury on Thursday, 96-95.  In that game, Bentley tallied a game-high and career-high 22 points, while also contributing five assists and four rebounds.  Just one day later, she topped that effort, establishing a new personal career-high with 24 points in a win over the New York Liberty at Madison Square Garden.  On Sunday, against that same Liberty squad, Bentley’s 12 points and four assists helped Connecticut to a 76-72 victory.
To date this season, Bentley ranks 13th in the Eastern Conference in scoring (11.2 ppg), fourth in three-point field goal percentage (.458, 11-of-24 from behind the arc), and seventh in assists (3.3 apg).
From the WNBA