Drovers set to take on Eagles 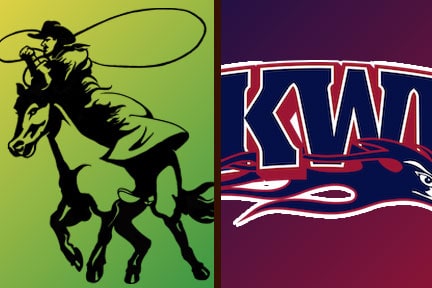 CHICKASHA – Nationals often mean a long bus ride for an exhausted team that’s playing a completely unfamiliar opponent but not this season for the Drovers. An in-state matchup pits them against a team they saw in the preseason just 192 miles away.

No. 21 University of Science and Arts of Oklahoma (17-3) travels to No. 20 Oklahoma Wesleyan (14-2-2) to take on the Eagles in the 2014 NAIA Men’s Soccer National Championship Opening Round on Saturday afternoon. Kick off is scheduled for 3 p.m. in Bartlesville.

“The location could not be better from a preparation or travel standpoint,” said Jimmy Hampton, USAO head soccer coach. “I feel fortunate to be playing so close to home. It’s great for Oklahoma college soccer to have two top teams in the country playing in our home state.”

This is the sixth straight national tournament trip for the Drovers, who are looking for a fourth trip to the tournament’s final site, which is in Delray Beach, Florida.

“In the round of 32 everyone is good,” Hampton said. “While playing at Oklahoma Wesleyan is a very tough challenge, we are looking forward to a great matchup between two great teams. The teams are much more alike than different.”

The players and coaching staff are familiar with the Eagles without having to do significant scouting reports, having faced them in a preseason exhibition in August. In that game, the Drovers topped the Eagles 3-1.

“We don’t put too much into the preseason game results,” Hampton said. “It merely allows us to know their individual kids, style of play and the speed at which they play.” 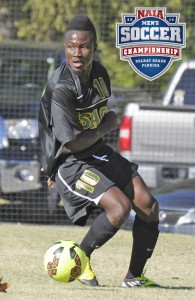 Hampton said both teams display an attacking style in their games. For the season, USAO has dominated offensively and in time of possession. The Drovers have 173 shots on goal compared to their opponents’ 51 and in total shots, they are the four-to-one favorite. The Eagles exhibit similar stats as well.

“Both teams play a very entertaining, attacking style of football. Both are big and physical and can run for 90 minutes,” Hampton said. “Additionally, both teams like to press the game and have special individuals that can win a game.”

USAO’s Stephen Owusu is one of those players. Having won the Sooner Athletic Conference Offensive Player of the Year honor this season, Owusu is dangerous when he gets the ball. He has eight goals and 10 assists and is tied on the team for most shots on goal. He has five game-winners this season.

Another key offensive force is Jean Gnapi, who had a team-high 12 goals on the season, a third of which were game winners. Liam Madden and Kyle Maxwell also put up strong numbers and open up the offense in the midfield.

Defensively, the Drovers rely on a strong back line that has given up just 51 shots on goal all season and their four-year keeper Bryan Byars, who has 39 saves and 14 shutouts this season. Byars broke the NAIA record for career shutouts in the SAC Championship game last week.

The Eagles’ Jack McGowan has scored 14 goals this season and teammate Lucas Cordeiro has 10 goals and 10 assists on the year. Both players earned Midlands Collegiate Athletic Conference First Team honors and Cordeiro was named Offensive Player of the Year for the conference.

“We know they have excellent attacking players, so we will have to stay very compact, transition behind the ball quickly, stay disciplined and defend as a team,” Hampton said. “Their best defense is their attacking style of play, so it is important we maintain possession when get it and force them to defend.”

The Drovers have been to the Opening Round five other times in school history, winning three of those five times. Last season, USAO traveled to Missouri Valley and fell late in double overtime.

USAO was one of the 22 teams who grab their spot with an automatic qualifier — which earned berths by winning conference, independent and unaffiliated group tournament or regular-season titles — when they took the SAC Tournament Championship on Nov. 14.

Eight other teams, including Oklahoma Wesleyan, earned at-large bids, which were based on the final Modified Ratings Percentage Index.

USAO is 6-6 in the national tournament while the Eagles are 2-3. The Drovers are the only team from the SAC in this year’s tournament.

With two teams that are offensive powerhouses, the game should prove to be an entertaining one for fans who make the three-hour trip from Chickasha to Bartlesville.

The Drovers are excited to stay close to home because of the opportunity to have fans there to cheer them on. Tickets are $8 for general admission and $5 for students with a current or valid student ID.

USAO Communications and Marketing is offering a free ride — and free admission — to the first 13 students who sign up. For more details or to register, visit usao.edu/forms/free-ride-nationals.

Those who are unable to attend can watch the game on live stream on OKWU’s website, www.okwu.edu/athletics.