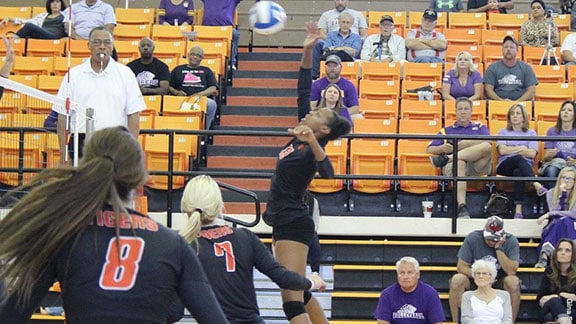 Defensively the Tigers were led by junior Lily Porsa with 22 digs and a service ace, while junior Taylor Turner added 19 digs, 58 assists and three aces.

The Tigers will now hit the road for the remainder of the weekend, facing Southern Arkansas (Oct. 21/7 p.m.) and Arkansas-Monticello (Oct. 22/12 p.m.) in Great American Conference action.

East Central 3, Langston 0
The Tigers started out the opening set on a slow note, falling behind 0-7. The Lady Lions (3-26) kept the momentum on their side and had increased the lead to five (9-14) before ECU started to push back. The Tigers went on a 7-2 run to tie the set at 16. The teams then traded the next four points to see the scoreboard knotted at 20. That is when ECU really took control, ending the set on a 5-0 run for the 25-20 win.

The second set started out much closer, with the teams trading the first 14 points and being tied at seven. That is when things turned in favor of the Tigers, as they used an 8-2 run to take control of the set for good. ECU kept pushing the tempo and eventually earned the 25-14 win.

The third set was all ECU, as they jumped out to a 6-3 advantage and never let Langston get closer than three points the rest of the set. The Tigers led by as many as eight before eventually winning 25-17.

East Central 3, Mid America Christian 0
The teams started out close with three tie scores in the first 14 serves. However, that is when the Tigers took control, using a 7-3 run for a 14-10 advantage. The Tigers continued to push the lead and led by as many as 12 before taking the set 25-14.

The teams traded the first eight serves of the final set before ECU pushed ahead with a 7-0 run (10-4). The Tigers never looked back and didn’t allow MACU to get more than three points in a row the rest of the set on the way to a 25-17 win.