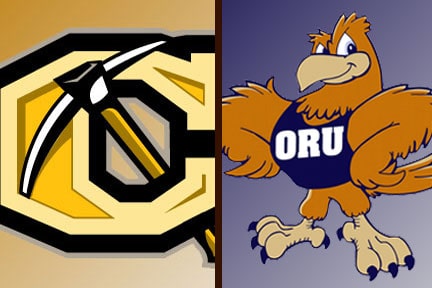 TULSA, Okla. – Oral Roberts opened up an 18-point first half lead and it dipped below 10 just once the rest of the game as the Golden Eagles topped Cameron 74-64 on Tuesday night at the Mabee Center.

ORU (5-3) was led by Shawn Glover who had 15 points, hitting that plateau for the 11th straight game dating back to last season. Jorden Kaufman added a career best 11 points, and Korey Billbury matched that mark. Drew Wilson, who made the first start of his ORU career, made the most of the opportunity with a 10-point, 10-rebound performance. It was his first double-double at ORU and the second of his career.

“Drew needed to have something good happen to him and I thought he and Jabbar (Singleton) played really well and played hard the entire game,” said Coach Scott Sutton. “In the first half, we didn’t shoot the ball extremely well but I thought our defensive intensity was good. We took a little bit of a step back in the second half.”

ORU made the most of the opportunity to spread out the minutes against Cameron, playing 12 of the 13 players on the active roster. Of those 12, 10 played at least 10 minutes, with Adrion Webber picking up nine minutes in the contest.

Cameron (3-4) had a trio of 10-point performances, including Will Cook, Desmond Henry and Charles Joy.

ORU held a 47-37 advantage in rebounds, marking a season high that topped the 45 rebounds at Tulsa to open the year. The Golden Eagles also matched a season high in blocks with six, including two from Corbin Byford.

ORU gave up the opening basket of the game on a Cook layup, but went on to score 21 of the next 26 points to open up a 21-7 lead nine minutes in.

A 3-point play by Brandon Conley and free throws by Kaufman pushed the ORU advantage to 18 in the first half, 36-18, before both teams hit a drought to end the half.  After a Conley basket at the 3:07 mark, there was just one field goal, a layup by Aaron Thompson with 1:01 left in the half.

Even with the dry spell, ORU took a 38-22 lead into the locker room at halftime.

The Aggies started quickly again in the second half and scored the first five points, making it a 7-0 run stretching over halftime , cutting it to an 11 point game at 38-27.

An 8-2 spurt by the Golden Eagles put them comfortably back in front 46-29.

The Aggies would not go away easily though, and cut it to 11 two different times inside of 15 minutes to play but both times Singleton drained a 3-pointer on the other end for ORU.

ORU answered with an 8-2 run to keep the Aggies at arm’s-length and cruised to the second home victory of the year.

After just their second home game in the first eight games, ORU will go back on the road to face 10th-ranked Wichita State on Saturday at Charles Koch Arena.