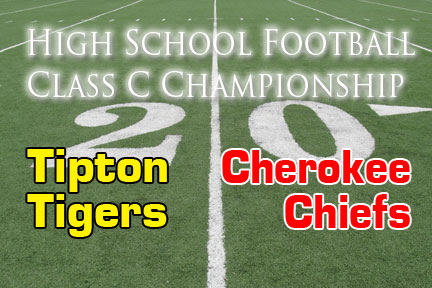 WEATHERFORD – Class C football concluded its season on Saturday afternoon at Southwestern Oklahoma State’s Fast Lane Field in Weatherford. The game featured the top two teams in Class C in a rematch of last season’s championship. Top-ranked Cherokee came into the game on a 25-game winning streak and looking to repeat as champions. No. 2-ranked Tipton hoped to get revenge for a 38-14 loss in last season’s finale.

The Tigers came out and seized the game immediately on the foggy afternoon. The two-headed attack of quarterback Gerald White and running back Bryant Flores proved too much for the Chiefs in the first quarter, as Tipton jumped out to a 24-0 lead. White opened the scoring off a 13-yard run to cap a seven-play 76 yard drive on the first possession of the game. After forcing Cherokee into punting on their first possession, White then found Flores on a screen pass that broke for a 64-yard touchdown. Flores completed the half with another 74-yard gainer on the ground.

The Tigers would continue to pour it on in the second quarter. White found pay dirt on a four-yard stretch play to make it 30 unanswered points for Tipton. Cherokee finally found the scoreboard when senior quarterback Tanner Bowman broke off a 45-yard scamper with 1:31 remaining in the half, but the two-point attempt was stuffed. Tipton, however, was unfazed, marching down the field in 31 seconds to record the final score of the half. White capped off the drive when he found receiver Tanner Knight all alone for the 20-yard touchdown strike. The teams would go into the locker room with Tipton holding a 38-6 lead.

Cherokee came out hoping to reverse their fortunes in the second half. Bowman ripped off another long touchdown run, this time for 52 yards, after only 90 seconds into the second half. Tipton then answered with three straight scoring drives, including an 83-yard rush by running back Jagger Jones, to end the game with the mercy rule with 18 seconds left in the third quarter.

Per OSSAA rules, if a team leads by 45 or more points after halftime, then the game is called. For the Tigers, it was their fourth straight playoff opponent to make subject to the rule. They won 58-12 and were crowned state champions on the same field they suffered heartbreak last season.

Tipton outgained Cherokee in total offensive yards, 539-265, despite the Chiefs running two more plays. Flores racked up 278 all-purpose yards, and finished averaging 13.9 yards on the ground and 32.0 yards per reception. White completed 76.9 percent of his passes for 246 yards and two touchdowns, while also gaining 63 yards on the ground and an additional two touchdowns.

Cherokee struggled early. Their normally potent offense was held scoreless for the first 22:29 of the game, and scored a season low 12 points. Bowman finished with 204 total yards, including 194 rushing, while scoring the Chiefs’ only points. He also finished as Cherokee’s leading tackler with 14, including nine solo tackles. Running back Nicholas Cochran was the Chiefs’ second-leading rusher, accounting for 47 yards on the ground.

With friends and family waiting to rush the field on the sideline, the trophies were awarded. Once the Tigers received the champion’s trophy, they were met at midfield by the ecstatic crowd as the Tigers won their second state title in three years. After a two year absence, the gold ball will be returning to Tipton.