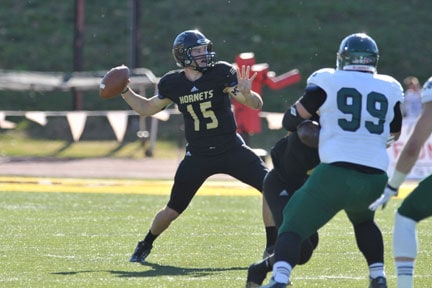 Ponca City alum Brent Wilson was named a finalist for the Harlon Hill Trophy, the NCAA Division II Football Player of the Year.

Wilson, a senior, has led the Emporia State Hornets to an 11-2 record and the first playoff wins for the program since joining Division II.

He has already been tabbed the MIAA Offensive Player of the Year, in a season in which (playoffs included) he has thrown for 3,920 yards (currently the most in D-II) and 39 touchdowns. He also has four rushing TDs to his credit.

Wilson came back to lead ESU following back-to-back seasons which were cut short due to collarbone injuries.

Wilson and the Hornets face a familiar opponent in league rival Northwest Missouri in the Division II Quarterfinals on Saturday in Maryville, Mo.