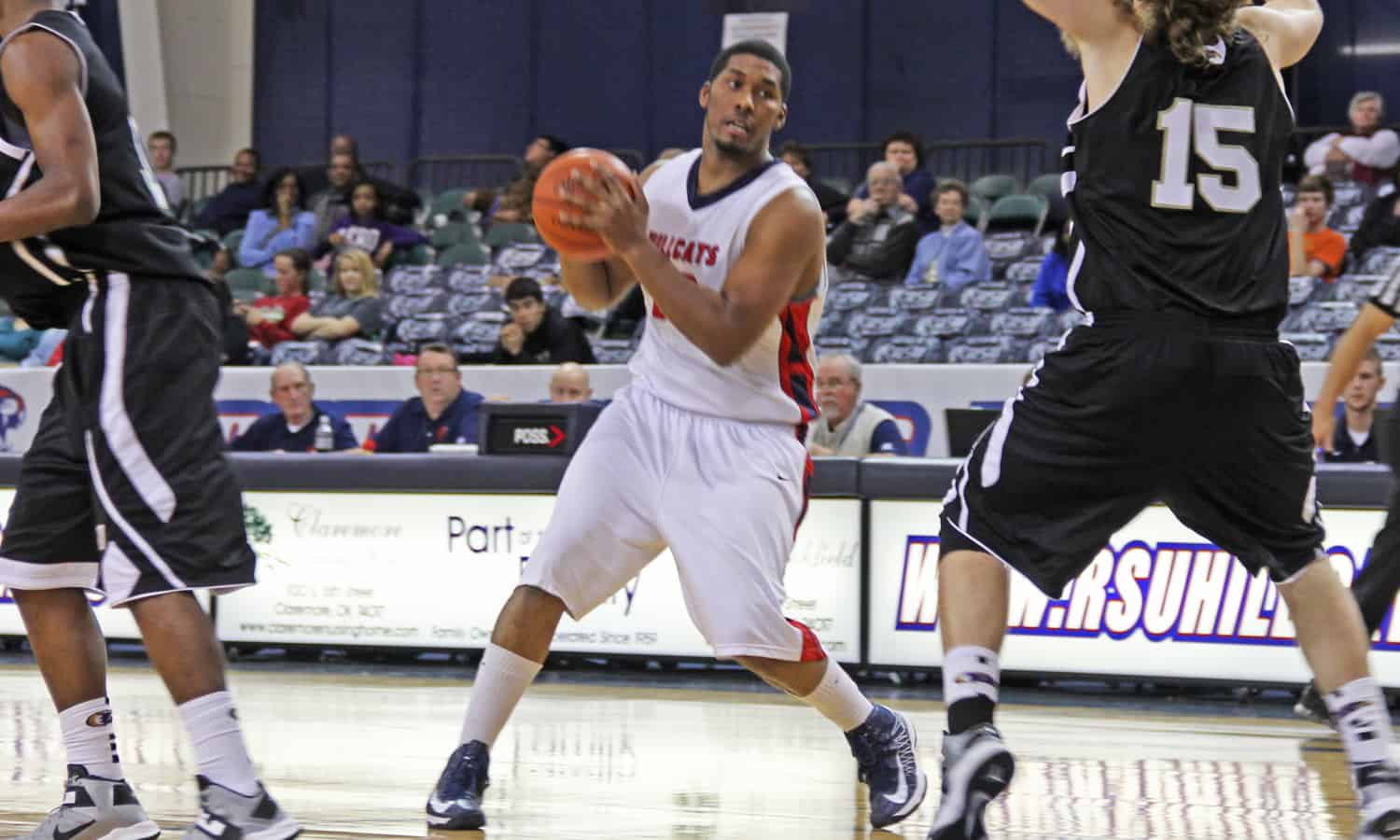 CLAREMORE, Okla. – The return of Brian Gibson helped return No. 19 Rogers State to the win column as the Hillcats bested No. 4 Oklahoma Baptist, 67-57, Thursday night inside the Claremore Expo.

RSU, after holding a 26-22 lead at the half, was held scoreless in the opening 4:30 of the second stanza as the Bison built a 33-26 advantage before Donald Williams connected from the left wing. The three-point jumper sparked a 9-2 run by RSU to tie the game at 35-35 off a Williams turnaround hook shot on the left block with 12:32 to go.

The tide turned with 7:27 remaining after a Justynn Hammond turnover the senior guard blocked the Bison layup and the OBU put-back was swatted by Alex Ewings and the Hillcats snagged the board. Two possessions later a pair of free throws by Hammond gave RSU the lead, one it wouldn’t relinquish, at 42-41 with 6:48 left.

The Bison cut the lead to five points with 3:01 remaining but Kendrell Thompson answered emphatically on the other end. With the shot clocking winding under-five seconds, the senior guard from Houston, Texas lofted a three-point shot from the left wing over the outstretched hand of OBU’s Chase Adams to push RSU up 59-51.

The Hillcats hit 9-of-10 from the charity stripe, making 83 percent on the night from the free throw line. Gibson returned after a knee injury kept him sideline for a month and posted a career high 12 rebounds on his birthday.

The senior center helped hold the Bison to the fewest points by a Hillcat Top 25 opponent this year. The victory moved RSU to 4-2 this season versus NAIA Division I Top 25 oppoenents.

Williams led all-scorers with 19 points while Ken Holdman finished with 14 for RSU. Thompson added 12 while Hammond came off the bench with 11 point as the Hillcats shot 39.6 percent from the field.

Oklahoma Baptist (14-3, 2-1) won the battle of the boards, outrebounding RSU 42-33. Marques Anderson led the Bison in the points column with 16 as OBU shot just 57.9 percent on free throws.

Rogers State (14-3, 2-1) travels to Arkansas Saturday to face John Brown (14-3, 3-0). Tip-time is set for 5 p.m. and RSU Radio 91.3FM will broadcast the contest. Live audio streaming can be found on the Hillcat Network at www.rsuhillcats.com/live or on www.rsuradio.com.

CLAREMORE, Okla. – The Rogers State women’s basketball team improved to 3-0 in Sooner Athletic Conference play on Thursday night with a 59-54 victory over Oklahoma Baptist inside the Claremore Expo.

The Lady Bison controlled the first four minutes of the game as they rushed out of the gate with an 11-1 advantage. However, the Hillcats bounced back over the next six minutes and used a 16-4 run to take a 17-15 lead. RSU ended the run with a steal by Adrianna Leatherbury, leading to a trey from the right elbow by Leah Smith. The Cats built a seven-point lead with four minutes to play in the half but the Lady Bison battled back with a 9-2 spurt to knot the score 26-26 at the break.

A conventional three-point play by Leah Smith and a layup by Kelby Fritz sparked RSU’s second half start. The Hillcats used a 10-3 streak to take their first double digit lead of the night with a steal and a layup by Ariani Silva. The run gave RSU an 11-point cushion with seven minutes to play. OBU cut the deficit to four points with 18 seconds to play but Sierra Cornwell sunk a pair of free throws to put the game away.

For the seventh time this season, Smith led the Cats in scoring with 17 points. Silva tallied 16 points, a team-high eight boards and three steals to round out the double digit scorers. RSU nabbed 16 steals as the Lady Bison committed 27 turnovers. Sierra Cornwell led the team in steals with five swipes but eight of the nine Hillcats who played tonight registered at least one steal.

The Hillcats’ 3-0 start in conference play is the best in program history.

Rogers State (13-4, 3-0) returns to conference action on Saturday as the Hillcats travel to John Brown at 3 p.m. The game will be streamed live on the Hillcat Network at www.rsuhillcats.com/live and on RSU Radio 91.3 FM.