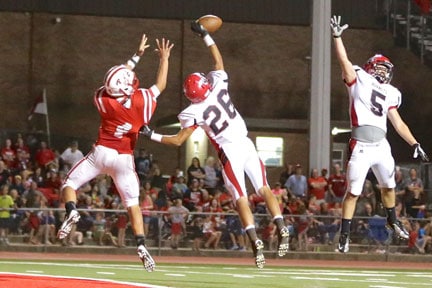 While there may have been some question during the spring as to who would be coaching the Hornets in 2014, the answer is the coach who there in 2013 – Chad Kirkhart.

Kirkhart had stepped down in April to take the assistant principal position at the school, but in May he once again assumed the mantle of the head football coach as well.

He will do both this school year.  And although the workload has increased dramatically, Kirkhart retains the reins of a program that he has guided to much success in the last two seasons.

Success that leads to the belief that more is to come.

The Hornets have made it to the Class 3A state quarterfinals in each of the previous seasons and the young men on his team are looking to return to the playoffs and go farther.

“After a while, you just kind of expect that,” Kirkhart said.  “It’s not that it’s going to come easy, but those are the standards that have been set and hopefully that just bleed over from one year to the next.”

Hilldale is 21-5 in the last two years.  And although there are positions in which he will have to replace production from last year, Kirkhart has some proven players returning.

But some will be filling different roles, like a pair of strong juniors anchoring the offensive line.

Another senior, Gunnar Drake, who is 6-foot-1 and 315, will be coming in at right guard.

Hilldale fans will get used to seeing Matt Bargsten on the field, as Kirkhart is looking for big things from the senior on both sides of the ball.

“Offensively, last year, (Bargsten) was more of a possession-type receiver,” Kirkhart said.  “We had two other guys that were our big play guys, but this year we’ll be asking more out of him definitely.  He’s going to have to make some big plays for us and be kind of our go-to guy in the passing game.

“Defensively, even though he was an underclassmen, he was the coach back there in the secondary.  He led our secondary in tackles and in interceptions.  Look to him to have a big year and not just defensively, but on both sides of the ball this year.”

But there will be some consistency lining up behind whoever wins that role, as running back Hunter Woods is returning.  Woods rushed for 865 yards in 2013 with four 100-plus yard games.

“Hunter had 20 touchdowns last year and had a really good year,” Kirkhart said.  “He stepped when another kid had gotten hurt.  But nowadays, you pretty much have to have two pretty good backs in order to make it through the year.  And I think (Devin) Cochran can step in and be that guy, as well.

“They’re both going to play defense and I think that allows us to rest them both from time to time.”

The Hornets move into District 3A-6 for 2014 and 2015 and will see some teams they haven’t faced much recently.

“The only team that is really familiar as far as who we’ve played is Beggs in a non-district game last year, but they’re in the district with us.

“It’s a pretty good district with Beggs, Checotah and Victory, probably at the top end of the district.  It’s going to be a battle, no doubt, but we’ve come out of a pretty good district, too.  You know, there’s not really much you can do about that, you just go play the teams on the schedule.  And we’ll be battling for a playoff spot just like everybody else.”

And as of now, Kirkhart is making it through with the dual responsibilities well.  He said he knew it would be two full-time jobs, but so far, so good.

“It’s going well,” Kirkhart said.  “It’s one of those things that, at first, I was just going to get out at the end of the spring.  And then the timing wasn’t great.

Hilldale opens the season at Stigler on Sept. 5 and hosts Fort Gibson in its home opener on Sept. 12.