Kingston moves to 2-0 with win over Valliant 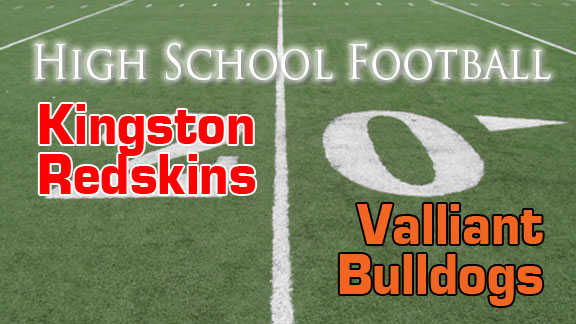 The Kingston football team made the trip to Valliant last Friday night and thoroughly trounced the Valliant team 49-7 to bring their season record to 2-0.

“It is hard to describe this team,” Kingston coach John Caraway said. “They’re not a big rah-rah type of team, they just play so hard. Everything happened so fast in this game. They flew to the ball. People were making plays right and left. It was a tremendous effort during the game. I am extremely proud of them.”

Skye Lowe once again opened the scoring for the Redskins on the first play from scrimmage with a 52 yard touchdown pass from Tyler Stovall with only 18 seconds off the clock. The Kingston kicker, Igor Grossi, nailed the first of his seven straight extra points to make the score 7-0.

“Tyler was really throwing the ball well,” said Lowe, who hauled down three passes for 162 yards and two touchdowns. “He only had one incompletion during the game.”

Kingston was so dominant that the first team played just a little more than half the game and Kingston had a commanding 42-0 lead at halftime.

The aerial onslaught was unrelenting as Stovall went 9-10 for an amazing 266 yards, averaging almost 30 yards per completion.

Paden Hayes scored a receiving touchdown as well with Stovall rushing for three touchdowns and Cody Flesher scoring the final touchdown for the Redskins in the second half.

Terrynce Giveswater led the team in tackles with 12 and Hayes tallied 11 tackles along with an interception from his free-safety and linebacker positions.

“Terrynce has some great quickness which plays a big part in his number of tackles,” Caraway said. “Hayes does a really good job coming up on the running plays.”

Kingston travels to Madill this week to take on the Wildcats in the “Marshall County Super Bowl”. Kingston has won the last two meetings from the cross-county rivals.

“Madill is playing with passion and I am expecting a good game from them,” Caraway said. “We have watched film of their games. They have a good football team and I expect a good atmosphere at the game.”