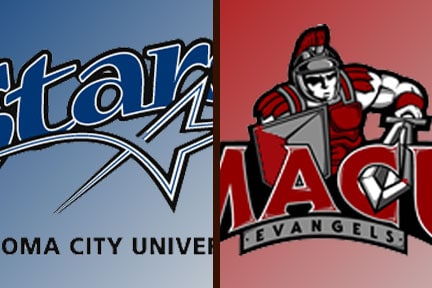 The win is the Lady Evangels’ first over a top-five NAIA ranked opponent since joining the NAIA.

With the match tied at 1-1, Kassie Byrd found a streaking Chelsea Swisher down the left side to set up a one-on-one opportunity with the keeper and Swisher punched it in 4:59 into the first overtime period for the victory.

OCU (8-1, 1-1 SAC) then battled back to tie the score seven minutes later on a score from Allie Glazner.

The Lady Evangels overcame a 26-19 shots deficit and were also out-shot 15-5 on-goal, but Melissa Dobie limited OCU offensively with 14 saves.

Byrd and Nimal each led the Lady Evangels with seven shots, while Meghan McMahon had a match-high 10 shots for the Stars.

The Lady Evangels will look to build on this landmark victory by playing at Rogers State University on Friday evening (Oct. 5) at 6 p.m. in Claremore, Okla.

OKLAHOMA CITY — The Oklahoma City University Stars struck late in the second half to snap a scoreless tie and went on to a 1-0 win over the Mid-America Christian University Evangels in the Evangels’ Sooner Athletic Conference opener Tuesday afternoon (Oct. 2) at MACU Soccer Field.

The Stars’ goal was scored by Adam Black as Black found the net from 20 yards out on the left side in the 73rd minute of action.

The shot count reflected how close of a match it was, as the Stars narrowly out-shot the Evangels 19-17 overall and 9-7 on-goal.

Tyler McIntosh made eight saves in the net for the Evangels and OCU’s Jalen Howard stopped all seven shots-on-goal he faced.

The Evangels will look to stop their three-game skid at Rogers State University on Friday night (Oct. 5) at 8 p.m. in Claremore, Okla.