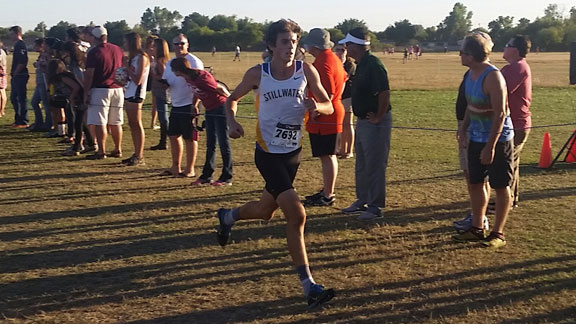 Stillwater High School’s Vlad Munteanu ran a personal best for the third straight race in the Central Oklahoma Athletic Conference Championship at the Norman Cross-Country Course in Norman on Tuesday.

Ean Beyer of Norman North won the 5K in 16 minutes, 9 seconds to win the conference championship, and Munteanu finished sixth at 16:44.

Edmond Memorial won the team championship with 66 points, and the Pioneers placed ninth out of 12 schools with 205 points.

Munteanu ran a 16:28 at the Chili Pepper Festival in Fayetteville, Ark., on Oct. 3, but out-of-state times do not count toward the state rankings, so 16:44 is recognized as Munteanu’s personal best in Oklahoma.

Coach David Crynes told Munteanu before the race to pace with Beyer because Beyer is the top-ranked runner in Class 6A. Munteanu tried to keep up with him for as long as he could, but Beyer pulled away late.

After realizing he could not keep up with Beyer any longer, Munteanu settled into his pace and hoped it would result in a good time.

“He ran with him to the 2-mile mark, but that kid had another gear and that’s why he is the best in the state,” Crynes said.

“I felt awful,” Munteanu said. “It was such a painful race; I don’t even know how to describe it. It was probably the most painful race I’ve ever ran.”

This is the second straight race Munteanu has run under 17 minutes in the 5K, and though that isn’t a comfortable task for many runners, he said he believes he can run those times consistently for the rest of the year, and he hopes he can keep getting faster.

Senior Jay Ogle also ran a successful race, running a 17:53. Ogle ran a 17:17 at the Chili Pepper Festival, but he is pleased he remained under 18 minutes.

“That was my main goal because I saw people were kind of falling off of their normal times,” Ogle said. “I was trying to stay in reach of that.”

Ogle placed 31st, missing out on a medal by one spot.

He said not earning a medal is a reality check, and he is going to use the experience to improve going into the regional meet.

“Good athletes have a bad memory,” Ogle said. “You have to forget all of your failures, but also you need to learn from them, so you can take that and move forward with it.”

Ogle said he plans to learn how to push himself at the end of a race because letting someone pass him is a situation he has dealt with in the past.

His sophomore year at the regional meet, another runner passed him at the finish line, and it ended up costing him a spot at the state meet.

The regional meet is next on the schedule for the Pioneers on Oct. 24, and although Munteanu and Ogle are satisfied with how they’ve performed, they said there is still work to do.

“Coach said he wants everyone on the team to be in the 17 range, and we’re not quite there yet,” Ogle said. “We’re going to push ourselves to get there for state.”