No. 20 Hillcat Men Cruise Past Cavaliers 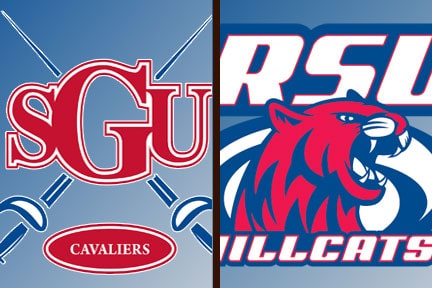 Alex Ewings led the defensive attack as he held the Sooner Athletic Conference’s leading scorer Fayzon Richey to just 10 points. Richey, averaging 22.9 points per game and No. 5 in the nation was kept in check with just four points in the first half as RSU led 45-21 at the break.

RSU led from start to finish with an advantage as large as 38 points when the Hillcats were up 88-50 with 3:56 to go in the game.

The Hillcats were spot on from behind the arc, connecting on 6-of-12 in the game and hitting 66.7 percent in the second half.

Justynn Hammond was a force in the paint totaling a career high 23 points for the Hillcats. The Seattle, Wash. native went 8-of-10 from the field and knocked down 70 percent from the charity stripe to lead all scorers.

Ewings not only limited the offensive output of Richey but also totaled a season high 18 points, one shy of his career high. As all five starters for RSU reached double-figures in the points column.

Rogers State (15-5, 3-3) travels to West Texas January 24 and 26 to face Wayland Baptist and Lubbock Christian. Both games will be broadcast on RSU Radio 91.3FM and streamed online atwww.rsuradio.com and on the Hillcat Network (www.rsuhillcats.com/live).