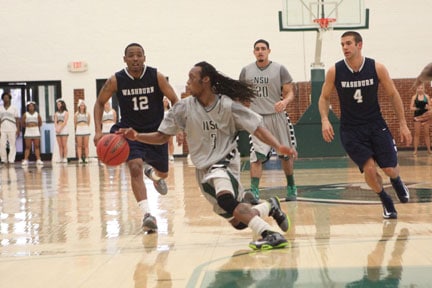 Junior guard Bryton Hobbs dropped 25 points and added seven assists in 39 minutes of work. He finished 14-for-17 from the free-throw line.

Senior forward Jermaine Bransford recorded his seventh double-double of the season with 10 points and 12 rebounds. Senior guards Ethan Anderson and Jon Miller combined for 30 points and made 7-for-8 from downtown.

Washburn (10-4, 3-3 MIAA) gave up the second-most points all season after entering the contest allowing just 62.2 points a game. The team also recorded a season-low in rebounds after NSU won that battle, 25-20.

The Ichabods held the advantage for the opening few minutes of the contest, but NSU powered ahead 16-10 with 13:05 remaining in the opening half. The two teams jockeyed for position and exchanged leads 10 times in the first 20 minutes, and Washburn took a 32-31 lead into intermission.

Northeastern State used a 7-0 run early in the second half to take a four-point lead, and the team would not relinquish the advantage for the remainder of the game. A 13-3 run in the middle of the second half would be enough cushion to fend off the top-10 foe.

The Northeastern State women also upset the No. 9-ranked Lady Blues 52-43 earlier in the day. The last time Washburn was swept on the same day was to Emporia State on Feb. 23, 2011.

The RiverHawks will stay at home for a 7:30 p.m. matchup Jan. 23 with Pittsburg State.