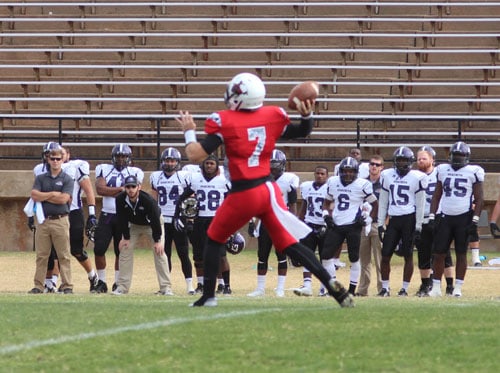 Are you ready for some football? The new coach at Northwestern certainly is.

Hired in November to be the head coach for the Rangers, Matt Walter is ready to get into football itself.

He has been involved in the workings and trappings that go along with the head position for months, but as the summer wears on, the opportunity to get involved in actual “football stuff” is refreshing for Walter who said he feels like he’s been doing everything but that.

“Geared up and starting to have coaches meetings and talking about offense and defense and schemes, instead of camps and recruiting, is a welcome feeling for me,” Walter said. “We started those meetings this week and I’m pretty excited about it.”

The NWOSU alum is glad to be back at his alma mater, which he has called a second home.

Walter is from Azle, Texas, and was a four-year letter winner at Northwestern. He started at fullback for the Rangers on the 1999 national championship team and the 2000 national runner-up team as well.

Although his focus is often the offense, he said he what it takes to win.

“I’m definitely and offensive-oriented guy,” Walter said. “But all the good teams we were on back in the late ’90s and early 2000’s that I played on and coached on were definitely defensive-driven.

“Three out of four years ranked number one in the country in total defense when we were wining all those games on the NAIA level. So I know where the game is won.

“We want to build defensively first and then offensively come around. On defense, you have to read and react and just be athletic. On offense, you can dictate pace and what the defense is going to do a lot of times.

“So you just want to be better on defense, man for man, than the other team. And that’s how we’re building it.”

Walter has a lot to work with on defense coming into his first season on the sidelines. And it starts right up front.

“Definitely Joby Saint Fleur. I mean, I get calls from NFL scouts on him already. He’s just going to be junior. They see it, everybody kind of sees it.”

The defensive line looks similar on the other side with Theodis Williams – 6-5 and 250.

“Those two D-ends are really good and are going to be catalysts on our defense.”

Walter said Devin Peyton stepped up in the spring to earn a spot at middle linebacker, but he’ll be fighting for that role with Brandon Cannon, who played a lot there last season.

The secondary is starting to take shape as well.

“Jordan Norris, one of our corners was really impressive in the spring had a great spring. I can really see him filling a role as a lockdown corner and matching him up on the best receivers in the league. He really grew from Practice 1 to Practice 15.”

He said he has more depth on defense right now and that the team will try to play to that strength.

Prior to coming to Alva, Walter spent six years at Emporia State, the four as offensive coordinator. So he hasn’t forgotten about the offense. It is just a situation that still is fluid.

“Offensively, I can think of only one position that is locked down,” Walter said. “One, that’s it, out of the 11. That is Justin Schanbacher.

“He played receiver last year, but I’ve moved him to our H-Back position. It’s a hybrid fullback and tight end position. Everything else is pretty wide open.”

The local product from nearby Cherokee led the Chiefs to a high school state championship as a quarterback and linebacker and he is poised to get to shine in his senior campaign at Northwestern.

“Justin Schanbacher will get it done with no flair. He’s very humble. You won’t see him get excited at all. But he may end the season with 80 catches.

“He’s a very vital catalyst for this offense as far as what he brings to the table as far as his versatility.”

After that, he said he knows the game is about the quarterback. But as of now, the starter hasn’t been determined. And Walter said it will not be a two-quaterback system.

“In the spring, two kind of rose above everybody else – Reed Miller and Ty Hooper, the guys that played the position more than anybody else. And they will be battling it out, for sure.”

The 2015 Rangers team is still a work in progress, and rightfully so in June.

“We’ll have an influx of talent,” Walter said. “Let’s see how they gel.

“You have to have the guys up front to protect them. We’re still trying to solidify an O-line and find out who can play and who can’t play. Going against Joby and Theotis every day definitely helps.”

Northwestern’s season opener is on a Thursday night. The Rangers travel to Arkansas-Monticello to take on the Boll Weevils on Sept. 3, with kickoff set for 7 p.m.