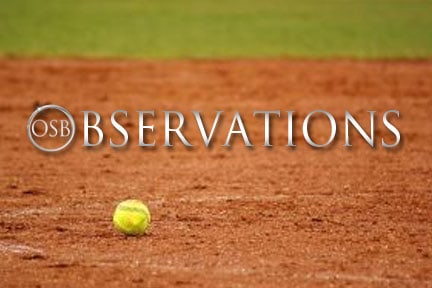 • Once again, there is good softball being played by Oklahoma teams.  Have to give a shout out to a couple of teams that have pushed winning streaks up into double figures.

◊ Southeastern
Following an upset to Harding, the Savage Storm (20-7) have notched 11 straight wins and have lost only once in the month of March.  During that span, senior Mindy McElroy was named Great American Conference Pitcher of the Week and sophomore Jessica Simmons was named GAC Player of the Week.

◊ Central
The defending national champions’ 11-game streak extends back to Feb. 23 and includes seven shutouts.  Senior pitcher Kalynn Schrock threw a perfect game in a 10-0 outing against Rogers State on Tuesday.  Schrock earned MIAA Pitcher of the Week honors during this stretch and junior Kaylee Brunson became the school’s all-time leader in steals (69) in the game that started the streak.

• Oklahoma State and Oklahoma found out who each will be playing in the Division I NCAA Tournament on Monday evening.

◊ Oklahoma State
The Cowgirls (23-8) are the No. 5 seed in the South Bend Region and will play Florida Gulf Coast (26-7), the winners of the Atlantic Sun Conference, at 11 a.m. Saturday in South Bend, Ind.

• Oklahoma Baptist baseball is 1-3 in its last four outings.
Of course, this includes a loss to the No. 13 team in NAIA (Northwood) and two NCAA Division II opponents (East Central and Oklahoma Christian).  Prior to that, the Bison opened the season with 22 consecutive victories.
So yes, 1-3 is a record worth noting.