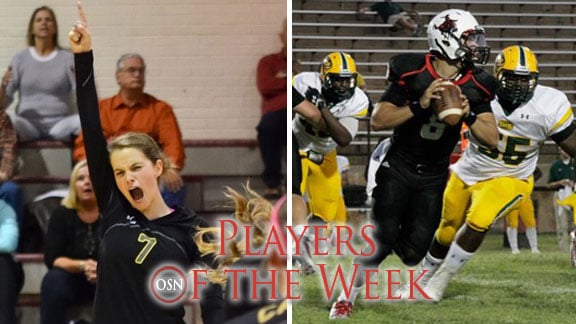 This week’s Players of the Week are Kat Evans, CU, and Reid Miller, NWOSU.

Evans helped her team to an undefeated start through its first four games, including sweeps over Arkansas Tech and Harding, picked to finish first and second in the GAC. She had double-doubles in three of the four games and finished the weekend with 19 kills and 16 digs against HU. Evans averaged 4.08 kills per set and 5.08 digs per set.

Miller helped his team to a win in its season opener – the Rangers’ first season opening win since 2009. He completed 33-of-45 passes for 379 yards and five touchdowns with no interceptions. Miller grabbed the starting role at NWOSU after strong competition through the fall. He also won the OSN Fan Poll this weekend with his performance.