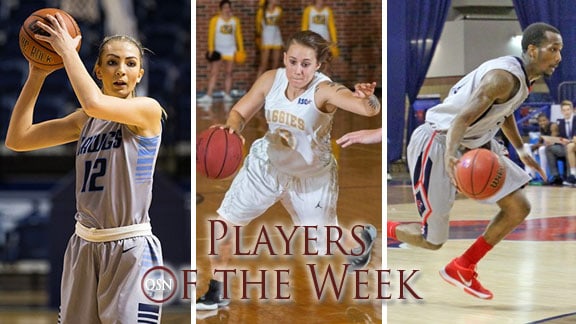 The redshirt freshman had a career night as she led her team with eight three-pointers, all of her made baskets, and finished with 24 points as Southwestern defeated Cameron, 83-77, on Saturday. Tucker went 8-of-17 from the field, to go with five rebounds, two blocks and a steal in the game in which she played all 40 minutes. Her eight long range makes are one off the school record, but are the most in the GAC this season.

Eight made three-pointers did, however, set a school record for the other team in that contest in Weatherford last weekend. Leal bested her own record, making 8-of-14 from behind the arc and her lone shot inside the arc for a career-high 26 points in the 83-77 loss. The senior also had four boards and an assist. And the eight three-pointers made by both players accounts for the second highest total in D-II this year.

Moore had a career high in scoring last week as the Hillcats kept their overall record perfect at 8-0 and won their first Heartland Conference game of the season. The senior put up 34 points (more than double his season average, which is pretty good at 16.5 ppg) and 28 of those points came in the second half as RSU rallied to beat Dallas Baptist, 75-72. Moore went 14-for-14 from the free throw line and dished out four assists as well.