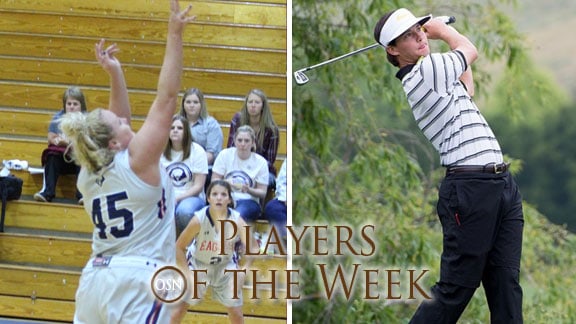 This week’s Oklahoma college Players of the Week, presented by First United, are Susan Ageson, OKWU, and Zander Winston, CU.

The Lady Eagles are No. 13 in the NAIA Division II WBB preseason poll and opened the year with two victories in Bartlesville. Ageson topped 20 points in each win. The senior had a game-high 22 points and five rebounds against Southwestern Christian and recorded a double-double with 20 points and 11 boards against Bacone.

Winston has won back-to-back individual titles as the fall golf season is winding down. He followed his victory at the Midwestern State Invitational with a win last week at The Classic at The Tribute. Winston shot a 66 on Day Two to move from seventh place to a tie for the lead and won it on a playoff hole. His efforts also helped his team to a second place finish in the event.