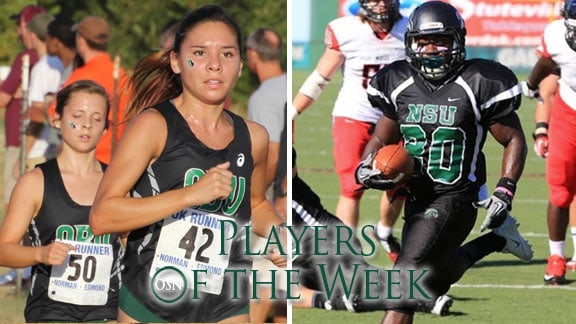 This week’s Players of the Week presented by First United are the OBU women’s cross-country team, and Joel Rockmore, NSU.

We’re giving the weekly honor this time to the entire OBU cross-country team. The Lady Bison finished first in their Invitational this weekend and did so with an incredible 21 points. OBU’s first five finished 1-2-5-6-7. Abby Hoover, already an OSN Player of the Week this year, won individually with a time of 17:34. Miranda Dent followed her at 18:01. Kaylee Large, Emily Sechrist and Sydney Lawrence were fifth, sixth and seventh, respectively.

The senior played a big role in the RiverHawks first win of the season. Rockmore gained 210 yards on 18 carries, averaging 11.7 yards with each touch, and had two rushing touchdowns. He has a total of 482 rushing yards on the season at the midpoint and is the first back from an Oklahoma college to cross the 200-yard mark in a game this year.