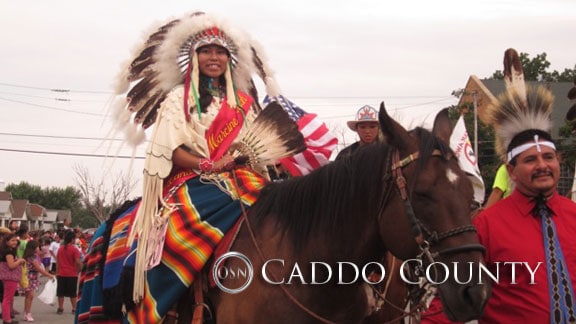 The Indian Princess at the American Indian Exposition Parade held in Caddo County. Photo provided by the Anadarko Daily News.

County seat: Anadarko
Population: 30,000
High schools (11): Anadarko Warriors, Apache Warriors, Binger-Oney Bobcats, Carnegie Wildcats, Cement Bulldogs, Cyril Pirates, Fort Cobb-Broxton Mustangs, Gracemont Lions, Hinton Comets, Hydro-Eakly Bobcats, Lookeba-Sickles Panthers
Universities: None
State championships (97): Anadarko leads the way in the county with 17 state titles. The Warriors won four in baseball and three in boys basketball, including the first in the county in 1919. The Cyril Pirates earned the second state title for the county with their only state championship, winning the boys basketball title in 1938. Hinton has 12 championships – three straight in boys track from 2004-2006, with the girls and boys both winning track titles in 2005. Fort Cobb-Broxton’s boys won the Class B basketball championship in 2015, the latest of four boys basketball championships, bringing the school’s total to 11 (16 counting those won at Fort Cobb and Broxton before the consolidation). Nine of Lookeba-Sickles’ 10 championships are in baseball, which includes the 2015 Class B spring baseball title. Hydro-Eakly (with Hydro and Eakly separately) has 12 titles, Binger-Oney (including Binger) owns 11, Carnegie and Cement each have eight and Apache and Gracemont have one apiece.

• Reggie Willits: Baseball and basketball player at Fort Cobb-Broxton (Class of 1999), earning All-State in baseball and honorable mention All-State in basketball; Played junior college baseball at Seminole State (third place finish at NJCAA World Series) and then finished college career at the University of Oklahoma; Drafted by the Los Angeles Angels in 2003 and debuted in 2006, fifth in voting for the AL Rookie of the Year, playing in six seasons all with the Angels; Currently the baseball coach at Binger-Oney, leading the team to fall and spring state championships during the 2013-2014 school year.

• 1964 Class B Baseball State Championship
Although he became one of the greatest (if not the greatest) catchers in MLB history, it was Johnny Bench’s pitching that won the Binger Bobcats the state title. Bench gave up only two hits in seven innings of work, while striking out eight and walking five in the 3-1 win. Binger scored all three runs in the sixth. Harold James, Spud Domebo and Jerry Scott each had an RBI.

• 2011 Class 3A Football State Playoffs
It took until 2011 of Anadarko to win its first state championship in football, but the Warriors have been a football powerhouse since that season. And their run through the playoffs was nothing short of dominating. Anadarko scored 207 points in its five playoffs wins, with the average score of 42-9 per game. The Warriors scored 27 unanswered points in the second half, after trailing 18-8 at the break – their only halftime deficit of the year – to beat Cascia Hall, 35-18, and go 15-0 on the season.

How do you get to Caddo County?  It is in the western central portion of the state and county seat Anadarko is about an hour’s drive from Oklahoma City on I-44 and then Highway 9. And you can get to any county in Oklahoma in a vehicle from the Stuteville Automotive Group, with locations in Atoka, Durant and Tahlequah.