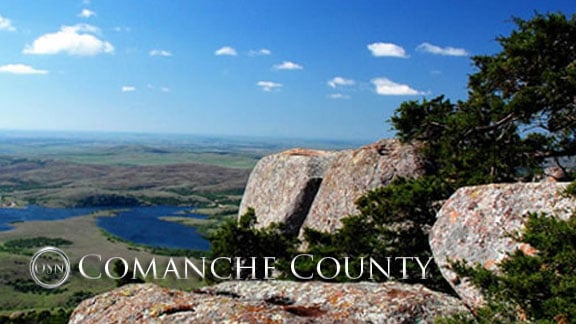 County seat: Lawton
Population: 125,000
High schools (11): Cache Bulldogs, Chattanooga Warriors, Elgin Owls, Fletcher, Geronimo, Indiahoma, Lawton Wolverines, Lawton Christian Crusaders, Lawton Eisenhower Eagles, Lawton MacArthur Highlanders, Sterling Tigers
Universities: Cameron University
State championships (68): Lawton High leads the way in the county with 24 and five of them came in 1962 (see below). Eisenhower has 13 with seven coming in boys track and MacArthur adds 10 more to the state total, with a three-peat in boys track from 1982-84. Sterling has five, all in fast-ptich softball, Elgin and Fletcher have each earned four, while Cache has three, Chattanooga has two and Geronimo and Indiahoma each own one. Additionally, the now-defunct Lawton Douglass High School took the Class B football championship in 1961.

• Stacey King: Played basketball at Lawton High School (Class of 1985); Played at Oklahoma University (1985-1989), was on the Sooners’ national runner-up team in 1988, and in 1989 won Big Eight Player of the Year, Sporting News College Player of the Year and was a consensus First Team All-American; Played in the NBA with five teams, most notably the Chicago Bulls, the team that drafted him in 1989 and with which he won three NBA championships; currently broadcaster for the Bulls

• 1962 – The calendar year earned Lawton the title of Home of Champions. The Wolverines brought home five state championships in that 12-month stretch. They won in boys basketball, baseball, girls tennis and boys track in the 1961-62 school year and then opened the 1962-63 year with a title in football – still in the calendar year of ’62.

• The 1980 Cameron basketball team ranks among the top in the state all time. The Aggies went 36-3, winning by an average margin of 20.1 ppg, with five players averaging in double figures and the team shot 55.1 percent from the field for the season. Cameron took the NAIA national title with an 84-77 victory over Alabama State in the championship game.

• The Lawton Eisenhower Eagles (14-0) won the state championship in Class 5A in 1990. To date, it is their only football championship, but it was the best as the team was ranked No. 1 in the country by USA Today, taking the mythical national championship.

• In 1987, the Cameron football team won the NAIA national championship, going 11-2 and taking the title game, 30-2, over Carson Newman in a game played on Cameron’s field in Lawton. The football program was discontinued in 1992.

How do you get to Comanche County?  It is located in the southwest quadrant of the state, just north of Cotton County, which is on the Texas border. And you can get there and to any county in Oklahoma in a vehicle from the Stuteville Automotive Group, with locations in Atoka, Durant and Tahlequah.