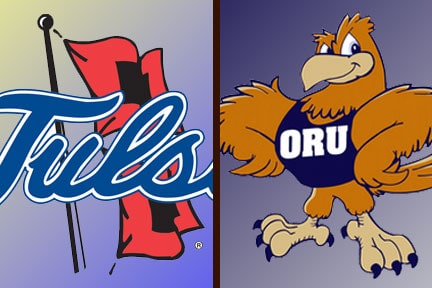 TULSA, Okla. – Oral Roberts University rallied to force a fifth set but could not capitalize on Tuesday night, falling to the University of Tulsa, 3-2, at the Kenneth H. Cooper Aerobics Center. Tulsa is now 5-3 on the season, while ORU falls to 4-4.

Tyler Henderson led the way for the Golden Hurricane, with 28 kills and a .352 hitting percentage. Diana Silva added a double-double with 14 kills and a team-high 17 digs, while Kellie Culbertson also had 17 digs.

Tatum Fredeen and Sheina Fernandes had 12 kills each to pace the Golden Eagles. Bruna Silva led all players with 27 digs, while Laura Taylor notched a double-double with 45 set assists and 10 digs.

ORU nearly toppled their city rivals despite hitting just .152 on the evening. Tulsa, meanwhile, hit at a .238 clip.

With the win, Tulsa has now won five straight matches over the Golden Eagles.

Tulsa scored the first three points of the opening set, but ORU quickly threw their hat into the ring. The Golden Eagles scored four straight on the strength of three TU errors to build an 11-8 lead, and the lead grew to its peak, at 22-16, on a Joana Gruber kill.

But the Hurricane rallied, as two straight Henderson kills started a 6-0 spurt that tied the set at 22-all. Then ORU scored three of the set’s final four points, capped by a Fernandes kill, to win the set, 25-23.

The momentum from taking the opening stanza did not carry over to set two for Sheera Sirola’s team. ORU tallied six consecutive attack errors midway through the period, helping Tulsa to a run of eight straight points as they built a 15-7 lead. The Golden Eagles never threatened again, and a Henderson ended the set with the visitors ahead, 25-16.

The third set also went to Tulsa by a wide margin, starting with a 4-0 Golden Hurricane run. After ORU cut the deficit to just three points, Tulsa reeled off eight straight points, capped by a Miriele Gobbo kill, to take a 22-11 advantage. They went on to win the set, 25-13.

But the home team would not go quietly, mounting a valiant effort in the fourth set. Down 11-8, Luara Rosa smashed a kill to kick off a four-point ORU rally to give Sirola’s club the lead. Another Gruber blast stretched the bulge to 20-17, but Henderson answered with a kill to tie the set at 21-all.

Again ORU responded, as Fredeen came back with a kill on the next point to give ORU the lead for good. Tulsa errors on the final two points gave ORU a 25-22 win, forcing a fifth set.

The fifth set started on the right foot, as a Rosa kill gave the home side an 8-5 lead. But the Hurricane came back with seven of the next eight points, capped by a Culbertson service ace, to build a 12-9 advantage. ORU cut the gap to 14-13 on a Fernandes kill, but Silva clinched with match with a kill on the next point, stopping the set at 15-13.

ORU’s powerful block was able to keep the Golden Eagles in a match where the offense didn’t click for much of the night. As a team, ORU finished with 16 blocks to Tulsa’s nine. Individually, Fernandes and Jessica Pancratz tallied seven blocks each.

ORU hits the road again this weekend to take part in the Mean Green Invitational in Denton, Texas. Sirola’s squad faces host North Texas in the opener, on Friday at noon CT.

Rob Walden is the Assistant Director of Media Relations at Oral Roberts University.