OSB 2012 No. 6: Hillcats national runners-up on the diamond 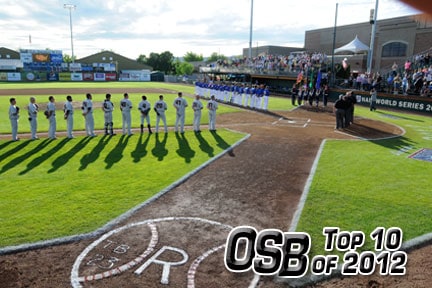 The Rogers State baseball team stayed in the NAIA top 20 through most of the 2012 season, but wound up in the top two when the season came to a close.

The Hillcats were 49-16 and national runners-up in an emotional season in Claremore.

Sophomore pitcher Tyler Brown was killed in a car accident three months before the season started, and his teammates would remember him throughout the year.  The Hillcats dedicated their season to him.

RSU won three straight, including a victory over top seed and Sooner Athletic Conference rival Oklahoma Baptist, at the host school Tabor College in the opening round of the NAIA national tournament to advance to the NAIA World Series in Lewiston, Idaho.  It marked the school’s first berth in the World Series.

The ninth seed in the 10-team bracket, Rogers State won its first two games, with the second an upset over No. 1 Louisiana-Shreveport.  The Hillcats fell to the losers’ bracket with a loss to Tennessee-Wesleyan.

Two more wins put them into the title game against TWC, but fell 10-6.  This was the first team in school history to play for a national championship.

Shawn Spainhoward and Eric Baker earned first team honors on the all-conference team and were among seven Hillcats to receive league honors.  Baker and Colton Campbell were also named to the SAC Gold Glove Team.