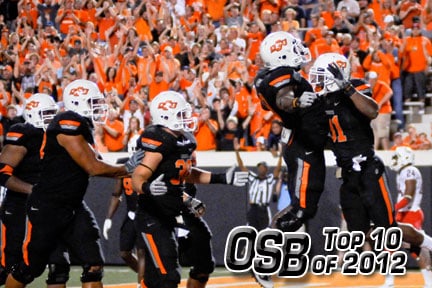 Oklahoma State’s 41-38 overtime victory over Stanford capped the best season in school history for the Cowboys.

The Cowboys were sent to Tempe to face the Cardinal after finishing excruciatingly close to place in the national championship game.  But head coach Mike Gundy (the Eddie Robinson Coach of the Year) had his team ready to play without a letdown in the school’s first appearance in a BCS game.

Neither team led by more than seven in a game that was back-and-forth throughout.  OSU scored last in regulation to tie the game at 38-38.  Stanford redshirt freshman Jordan Williamson missed a 35-yard field goal attempt as time expired and extra play was needed.

After another miss in overtime, Quinn Sharp hit a 22-yarder to give the Cowboys the three point win.

Brandon Weeden threw for 399 yards and three touchdowns in his final game as a Cowboy.  Justin Blackmon had nine receptions for 186 yards and was the recipient of all three Weeden TD passes.

OSU’s defense made a statement as well, not only defeating heralded Stanford quarterback Andrew Luck, but adding his name to the list of other high-profile QBs to fall to OSU.  That list included Landry Jones and Robert Griffin III.