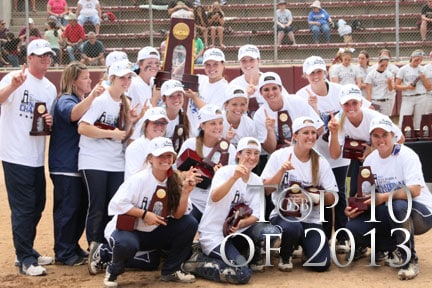 UCO entered the NCAA Division II national tournament as an at-large bid, but once they got in, the Bronchos never looked back.

Central (51-11) won nine straight games, culminated with an extra-inning thriller in the championship game to win the first-ever national title for a women’s team in school history.

Junior pitcher Kalynn Schrock (34-6) was named the Tournament MVP.  She pitched complete games in the final 10 games of the season – totaling 64 innings – and was the only pitcher who saw the mound for UCO through the entirety of the national tournament.  Her 34 wins was the most in D-II for the season.

It looked like the happy ending for UCO would come in the seventh.  Edwards, who was named All-American from three organizations, broke a 1-1 tie with a bases-loaded single, sending in Collet.  But Kutztown sent the game to extras on its final strike, with a double that scored a runner and tying the game at 2-2.

Edwards seemed destined, though, to being in the game winning run.  With two on, she did just that by way of a two-run double in the top of the ninth inning.  Sam Cool then doubled in Edwards, as the Bronchos put in three runs in the inning.

The win was the 475th career victory for coach Genny Stidham.  Along with assistant Cody White, the staff was named Coaching Staff of the Year at the regional and national levels.