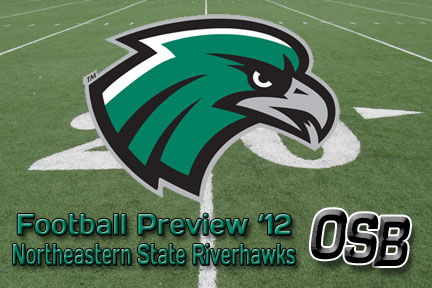 The Northeastern State RiverHawks are coming off their most successful season in more than a decade.  NSU finished the 2011 campaign with a 7-5 record and an appearance in the Mineral Water Bowl, one of only two bowl games for Division II schools.

And now the real work begins.  Northeastern begins play this season as a full member of the Mid-America Intercollegiate Athletics Association.

Last year, the RiverHawks played an independent schedule, as a result of the transitional process of moving out of the Lone Star Conference and into the MIAA.

There were ups and downs for head coach Kenny Evans and the RiverHawks playing through such a varying schedule.

“We played a Division I opponent and we played an NAIA opponent and a lot of teams in the Great American Conference,” Evans said.

“We started out a little slow after a big win in our opener.  We were sitting at 1-3 before finally getting on track and winning six in a row and ending up with a seven-win season.  We lost the last one to the No. 1 team in the nation in the last 30 seconds of the game by two points.

“But it was a great regular season and we were allowed to go to the Mineral Water Bowl.”

The quarterback-receiver combo of Johnny Deaton and Trey McVay was a huge reason for the success and provided excitement for the fans to watch.

McVay was a senior in 2011 and has moved on (not before the setting the NCAA receiving mark for all divisions with 425 yards), but Deaton was just a freshman and has a bright future ahead of him.  Evans said that he is happy to have him in Tahlequah and looks forward to big things.

“Having him for this year and two more after is great for us,” Evans said.

“He and Trey hooked quite a bit a year ago and I believe that we had 30 team and individual records that were set last year at Northeastern.  And Johnny didn’t start until Game 4.  We’re really excited about what he can bring to the table.”

Deaton will still be looking downfield, but McVay’s production may be achieved by committee.

“Replacing Trey will be difficult, but we do have a host of returning receivers,” Evans said.

That group includes Jermaine Sherman, last year’s No. 2 receiver, Jahmai Coleman, Cruz Williams and Montre Nelson, a transfer who got to NSU midway through last season.

“With all of the transfers, we’ve got some guys that are a little older.  And we may not have one guy that can replace Trey, but we have a lot of guys that can make up the difference.”

The RiverHawks won’t move the ball exclusively through the air, and Evans said that he knows the running game is vital in the new conference.

“The rushing game is a point of emphasis for us,” Evans said.  “We feel like because we’re moving into the MIAA, which year after year is the toughest conference in Division II football.

“Teams that are successful have a great rushing attack.  I’m not unfamiliar with that.  In my years at North Texas, we had the nation’s leading rusher a couple of times.

“It’s something that we have put a lot of emphasis on this past spring and are continuing to do this fall and hopefully we’ll be able to run the ball a lot more effectively.  A year ago, we probably didn’t want Deaton to carry the ball too much himself.  But he’s a tremendous athlete also.  So those are things that hopefully we can add to our package.”

Joel Rockmore and Terrance Dixon, who were the team’s leading rushers and combined for seven rushing touchdowns and almost 1,000 yards, will be called on to carry the load as well.

One of the biggest concerns will be to replace the offensive line from last year that had started for four years.  Landing OSU transfer Michael Bowie is a step in the right direction.

The defense returns strength and experience.

Langston Jones was the MVP of the Mineral Water Bowl a year ago and will be at one outside linebacker spot. Cayle Shambaugh, who played baseball at OU, and who started half the season  last year as a freshman, has been moved to be the other outside linebacker.  Jack Gray returns and along with Chris Dinkens, another transfer from OSU, will fill the middle spots.

“I think we can have the best secondary we’ve had,” Evans said.

The RiverHawks must replace Nate Robinson, an All-American at cornerback, but there are many new and old faces, including Vernon Jones, who had four interceptions a year ago.  Also in the fold is Victor Thompson, who started three years ago at OSU.

Two defensive ends are gone from last year’s unit and Evans said he is adjusting how they will defend.

“Up front, we’re not going to be as big as we’d like, but we’re very athletic,” Evans said.  “We’ll be moving around a lot and coming at people from different angles.”

Moving to the MIAA is a big step for Northeastern.  Evans is complimentary of the league and knows that success won’t come easily.

“It’s such a professionally run conference,” Evans said.  “They’ve been very inviting and welcoming to us.

“And then they handed me my schedule and we open with the defending national champions.  And five of our first seven opponents were in the top 20 last year.  Four of them were in the national playoffs and one them was in the other D-II bowl game.  So we know that the greeting has a little smirk behind it, too.”

But there is a thrill of opportunity that accompanies the challenge.

“We know that we’re really going to have to step it up in this new conference, but our guys are really looking forward to that.”

Northeastern hosts Pittsburg State on Thursday, Aug. 30, at Doc Wadley Stadium.  The entire schedule is made up of conference games.  The battle for the President’s Cup against archrival UCO will be in Edmond on Nov. 10.