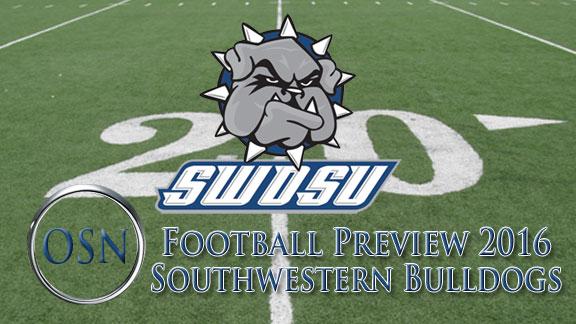 Southwestern made a postseason appearance in 2015, and won five more games than it did in 2014 (3-7). The turnaround came with some offensive adjustments in the offseason and a six-game winning streak to close out the regular season. Cocannouer earned the honor of GAC Coach of the Year, as well as the AFCA Region 4 Coach of the Year.

Senior Mark Evans returns and is an efficient passer who threw for 269.1 yards per game in 2015 and was picked off only eight times. He’ll have team MVP and honorable mention All-GAC receiver senior D.J. Jones back as a primary target. The Bulldog backfield consists of two honorable mention all-conference performers in senior Kartrell Henderson and junior Kenneth Martey, who combined for nearly 1,400 yards rushing and 18 rushing TDs. Senior Collin Bricker has been solid at the tight end position. Juniors Kevin Blessing, who started all 12 games last season, and Garrett Luke, honorable mention All-GAC, return to the offensive line.

Clinton Horn and George Woods are the returning seniors on the defensive line and they recorded 5.0 and 3.0 sacks in ’15, respectively. Junior Austin Loomis is a two-year starter at linebacker and senior Gentry Rogers provides strength at the position and should be a starter this year. Senior safety Conner Bays had a team-high 115 tackles last year along with three interceptions and was an all-conference performer. An All-Region player in 2014, Kevin Joseph returns for his senior season at cornerback.

Jones may have been honorable mention All-GAC as a receiver, but he made the list a second time and was a first teamer All-GAC as a return specialist. He was also an All-American who averaged 19.6 yards per punt return and took two punts in for touchdowns. Three kickers attempted at least two field goals last year and were nearly perfect on PATs – and all three are back this season. Senior Tyler Peterson connected on 26-of-27,  junior Dalton Jackson on 15-of-15 and junior Michael Perez on 8-of-9. Jackson and Perez are also punters.

It’s impossible to say for sure whether SWOSU would have gone on that six-game winning streak to end the season if the team hadn’t suffered back-to-back shutouts the two weeks prior. It is, however, safe to say that although this is an offense that can produce when at full strength, it needs to be at full strength for all 11 games. And if it stays at a high level consistently throughout the year, eight wins could be notched on the schedule for a second consecutive year.