OSU gets past St. Gregory’s with late goal in LSA title game 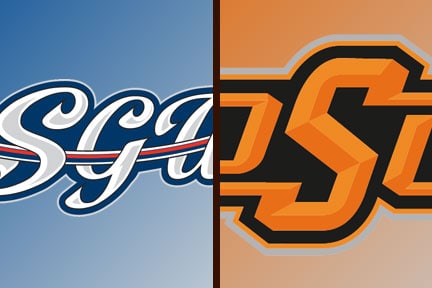 DALLAS – In a game where breathing room was hard to come by, Oklahoma State found just enough of it in the end. The Cowboys got a late goal Sunday from captain Drew Hogan, giving them a 7-6 win over St. Gregory’s in the Lone Star Alliance Division II championship game.

With the clock ticking under 30 seconds in a deadlocked contest, Hogan picked up a loose ball about five paces outside the crease and fired it toward the goal from the left side. The attempt sailed just past the outstretched stick of St. Gregory’s keeper John Curtis for what proved to be the game-winner.

The Cavs’ desperation attempt for the equalizer from James Smith went wide as time expired.

“I couldn’t be more proud of the guys on this team,” said St. Gregory’s coach Bryan Seaman, who was named LSA DII Coach of the Year Saturday. “When practice started in August we were a bunch of young, inexperienced, unorganized men just trying to become a team. They grew into intelligent and athletic lacrosse players that became a force in the conference and just inches away from a title.”

The game was tight from wire to wire, featuring five ties – including at the end of the first, second and third quarters. The largest lead was owned by SGU at 2-0 with 7:53 left in the first period after Richard Fromdahl converted scores from Donald Murphy and Smith.

The LSA North regular-season champs didn’t go away, though. The Pokes’ Ryan Tarzia converted the equalizer with 8:46 remaining, setting up the game’s dramatic final sequence.

“This group did an incredible job of laying the foundation and setting the bar extremely high for future Cavalier lacrosse players,” Seaman said. “This day will stick in our memory for a long time and will fuel us throughout next season.”

Smith, the LSA’s DII Rookie of the Year, extended his streak of hat tricks to 11 with a 3-goal day. Fromdahl had those two early goals to go along with an assist. Murphy totaled a team-best seven ground balls, and Curtis turned away 18 shots in goal.