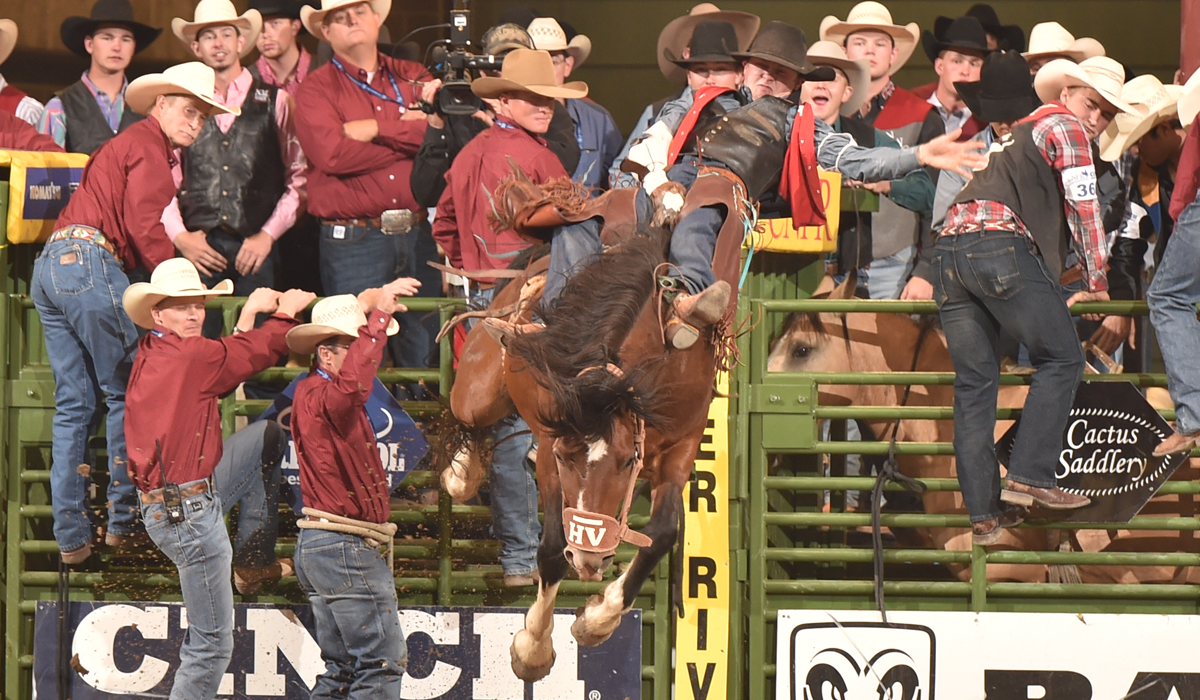 Will Martin finished round three in the second place position with a 79-point ride. He looks to have another great ride tonight in the short round at the CNFR. Photo by Dan Hubbell

CASPER, Wyo. — When the dust settled at the Casper Events Center in Casper, Wyo. at the 2017 edition of the College National Finals Rodeo (CNFR), the Oklahoma Panhandle State University Men’s Rodeo team found themselves at the top of the charts earning the coveted National Championship Men’s Team title and this year’s qualifiers have their sights set on a title to match as they look to bring a seventh national champion men’s team title back to Goodwell. With the third performance in the books as of last night, June 15, four athletes have secured their spot in the championship round of the CNFR set for tonight, Saturday, June 16.

“We’re fortunate to have this opportunity again and they will all be trying hard tonight,” head coach Robert Etbauer said.

Jake Finlay is leading the charge for the men in red and blue. The senior from Queensland, Australia secured a round three win with an 81-point ride as the curtain closed in the saddle bronc riding landing Finlay in the top spot in the average going into Saturday’s short round. In his third appearance at the CNFR, Finlay wants the event title more than ever having finished fourth in 2017 and 12th in 2016.

While Finlay may very well be one of the men everyone in Casper is talking about, teammate Dawson Dahm has also punched his ticket in the saddle bronc riding to the final round currently tied for third in the average. Dahm, a freshman in his first qualification to the CNFR, looks to join forces with Finlay to continue the legacy Panhandle State is so well known for in the bronc riding established by Coach Robert Etbauer, his brothers, and former Coach Craig Latham.

Rounding out the short round qualifiers, Dustin Martinez is ninth in the average in the bull riding. A local fan favorite from Guymon, Okla., Martinez will also be in hunt of great ride to move up in the average and add to the 445 points the team currently has secured.

Overall, the team is on top of the leaderboard right now with Tarleton State close behind with 405 points.

Each of the men in red and blue will be aiming for the best rides of their life as they lay everything on the line to earn the title of college national champion.

The short round will be broadcasting live on ESPN3. ESPN3 is a 24/7 live digital network available on WatchESPN. The CNFR will be available on the following devices and platforms: WatchESPN.com, iOS, Apple TV, Android, Chromecast, Kindle Fire, Fire TV, Fire TV Stick, Xbox, Windows 8, and Roku.