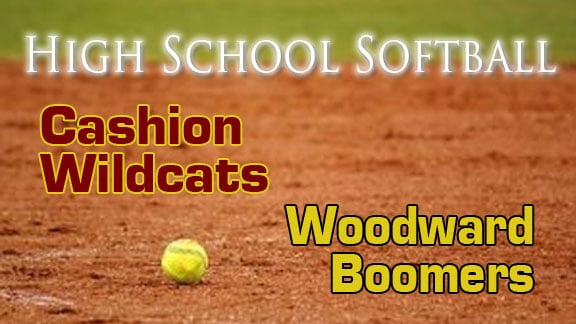 Cashion scored nine runs in the fifth inning to take a brief lead over Woodward on Tuesday. But Kameron Pope had nearly that many RBIs by herself, and the Boomers quickly righted the ship to take the win at home.

Woodward beat Cashion, 17-9, to move to 19-1 on the year and pushed its winning streak to double digits.

Pope tallied eight RBIs in the game with six coming on the backs of two homeruns. Her homer in the fourth inning was a grand slam.

The Boomers built a 7-0 lead going into the top of the fifth inning when the Wildcats came to life. Eight straight batters scored for Cashion and 13 players had an at-bat that half of the inning and went on top, 9-7.

But Woodward countered by plating the first four batters in the bottom of the inning and scored seven to retake the lead at 14-9.

Woodward got three insurance runs in the sixth.

The nine runs put up by Cashion were not only the most Woodward has given up in an inning this season, but also in an entire game.

Devre Newby and Rachael Diercks each had two RBIs. Newby was 3-for-5 on the day and Diercks was 2-for-3.

Gracen Williamson had a solo homerun in the fifth.

Sierra Whipple got the win, coming into the game in the fifth to relieve Leah Applebee. Whipple sat down five of the six batters she faced in one and two-thirds innings and struck out three.

The Boomers next to the diamond in the Highway 81 Classic starting on Thursday.