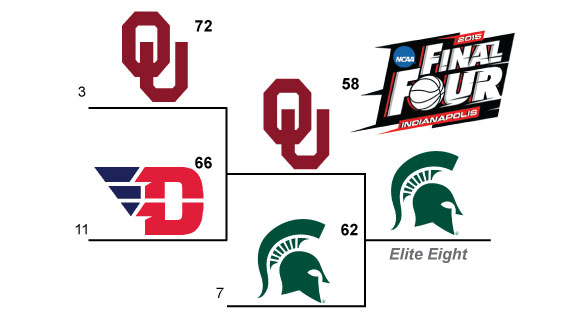 The Sooners had a 10-point lead twice in the first half and didn’t expand on either, going cold shooting immediately after taking the double-digit advantages.
Buddy Hield, Big 12 Player of the Year, had 21 points for the Sooners.
Travis Trice had a game-high 24 in the win. Denzel Washington scored 13 of his 18 for MSU in the second half.
TaShawn Thomas had 16 points and seven boards. Ryan Spangler had nine rebounds, but only four points.

• Defeated No. 14 seed Albany, 69-60, and No. 11 seed Dayton, 72-66.
• One of only six teams nationally to have started the same five in every game this season.
• This is the Sooners’ first trip to the Sweet Sixteen since 2009.
• OU out-rebounded tournament opponents by an average of nine in first two games.
• Buddy Hield has made 179 three-pointers over the last two years, which is a school record for a two-year span.

• Defeated No. 10 seed Georgia, 70-63, and No. 2 seed Virginia, 60-54.
• This is the 18th straight trip to the NCAA Tournament for the Spartans and the fourth straight trip to the Sweet Sixteen.
• MSU has held its first two NCAA opponents to shooting less than 32 percent from the field and less than 20 percent from behind the arc.
• Branden Dawson had a double-double (18 points, 10 rebounds) when the two teams met last season in the regular season. MSU won, 87-76, in the Coaches vs. Cancer Classic in Brookyn.