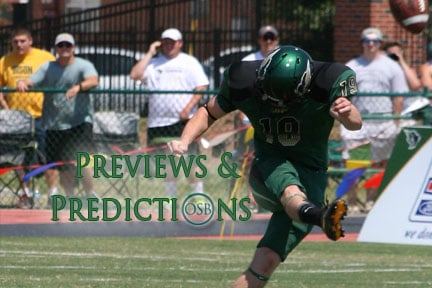 All 14 Oklahoma schools are back in action this week (Tulsa lost to Iowa State last night, 38-21) and this will be the final weekend in which there are no intrastate games.  Last weekend was brutal for the Sooner State as no state schools won.  Fortunately or unfortunately, Matt and I both picked 80 percent of the games right (8-2 each).
Oklahoma at Notre Dame headlines a big football weekend on the final Saturday in September.
Overall in 2013: Joey 27-9, Matt 24-12

No. 13 Oklahoma (3-0) at Notre Dame (2-1)
The big number here is the commanding series lead by Notre Dame.  The Fighting Irish have an 8-1 advantage through the years and won last season in Norman, 30-13.  The Sooners have won eight straight regular season games since that loss.  ND quarterback Tommy Rees has completed 60.7 percent of his passes, but OU has been effective against the pass this season and hasn’t given up a passing TD.  Blake Bell will be the starter again this weekend for the Sooners following his 413 yard passing performance against Tulsa.  Notre Dame has a 10-game winning streak at home.
Joey’s Pick: OU 37-27
Matt’s Pick: OU 35-20

No. 11 Oklahoma State (3-0) at West Virginia (2-2)
The series between the new Big 12 rivals is tied at 2-2 with OSU winning last season, 55-34.  Former OSU offensive coordinator Dana Holgerson will try to even the score, but to do so his team must score.  They were shut out last week against Maryland.  The Cowboys haven’t lost to an unranked opponent since the start of the 2010 season.  OSU has ha 20 plays of 20+ yards this season, but is also effective at close range.  The Pokes have scored in the red zone 100 percent this season to lead the Big 12 and nation.
Joey’s Pick: OSU 45-24
Matt’s Pick: OSU 48-14

Central (0-3) at Washburn (3-0)
The Ichabods will be seeking revenge at home for the loss at the hands of the Bronchos last season.  UCO’s 38-20 upset over then-No. 9 Washburn was its first conference win in the MIAA.  Central has not fared well on the road, losing 16 of its last 17 games.  Joshua Birmingham continues to shine running the ball and had three more scores last week and newcomer Marquez Clark grabbed a school record 13 receptions in that contest, too.  The Bronchos’ defense, however, is giving up a league-worst 57.0 ppg, which is just about what the Ichabods are scoring per game (56.3).
Joey’s Pick: WU 49-34
Matt’s Pick: WU 41-24

East Central (1-2) at No. 8 Henderson State (3-0)
The Reddies have moved up one spot in the national poll and received individual national attention as well.  Keaton Stigger was named the GAC Defensive POW and the Beyond Sports Network national Player of the Week for his performance at SOSU last week.  But HSU gave up 35 points last week and the Tigers need to get more balance from their offense to challenge in this one.  Sophomore QB Spencer Bond is passing for 177.3 ypg, but is also the team’s leading rusher. He’s gaining 50.0 ypg on the ground and may need more from his fellow backs.
Joey’s Pick: HSU 42-24
Matt’s Pick: HSU 41-21

Northeastern State (0-3) at No. 24 Emporia State (3-0)
RiverHawks’ linebacker Langston Jones is leading Division II in tackles (15.3 per game).  But the NSU defense will have its hands full again this week.  ESU leads the MIAA and is third nationally in total offense at 596.3 yards per game.  The Hornets are putting up 43.7 ppg as well.  Injuries to players in key roles (QB, TB) have slowed down the RiverHawks’ offense.  NSU has scored 23 points in its first three games.
Joey’s Pick: ESU 38-16
Matt’s Pick: ESU 44-3

Southern Arkansas (2-1) at Northwestern (0-3)
More growing pains for the young Rangers who had double their point total last week (20) than in the first two weeks combined (10).  But turnovers were costly for NWOSU – three to go with a blocked punt – in a game it lost by only two points. First time in 16 years these two have met and SAU leads the short series 2-1.  NWOSU is still looking for its first official win as a member of the GAC.  It could be any one of three QBs at the helm for the Rangers.  LT Pfaff has come from third on the depth chart to call the signals of late after injuries to Miller and Streck.  Tyler Sykora leads a potent Mulerider charge on offense.
Joey’s Pick: SAU 42-13
Matt’s Pick: SAU 45-38

Oklahoma Panhandle (1-3) at McMurry (0-3)
The Aggies pay a visit to new conference rival, though not on the football field.  McMurry is moving from D-III to D-II and will be a member of the Heartland Conference.  And although OPSU and McMurry are the only football schools in the Heartland, the Aggies play in the Central States Football League.  McMurry is playing a schedule full of Lone Star Conference opponents.  But the two meet on Saturday. Both had have some struggles offensively and both have given up many points in defeat.  The defense that stands up in this one will give its team the upper hand.
Joey’s Pick: OPSU 35-20
Matt’s Pick: McM 24-10

Southeastern (1-2) at Ouachita Baptist (2-1)
The Savage Storm held their own against a tough Henderson State team last week, but couldn’t complete the upset.  SOSU is scoring at a clip of 41.7 ppg and sophomore QB Nick Sioson is averaging 315.7 ypg passing (third in the GAC) and has thrown nine TD passes.  Redshirt freshman Devlin Wortham has been keyed on defensively and has only 73 yards rushing in two games after a 240-yard output in his debut.  OBU’s Chris Rycraw leads a strong ground game for the Tigers, picking up 93.5 yards per game.
Joey’s Pick: SOSU 38-35
Matt’s Pick: OBU 31-20

Southern Nazarene (0-3) at Harding (1-1)
The Crimson Storm goes on the road to try to stop the Bisons’ triple option.  Southern Nazarene has given up 60.0 ppg and 570.0 ypg, though those numbers are skewed somewhat by the tough loss to HSU in the opener (82-10).  Offensive numbers for SNU are not strong, but the offense hasn’t been on the field for too long.  The Harding running game can eat up the clock so SNU will need to score at every opportunity.
Joey’s Pick: HU 35-20
Matt’s Pick: HU 44-10

Arkansas-Monticello (2-1) at Southwestern (2-1)
It’s a short-lived series so far between these two.  Each team has won at home over the last two years – SWOSU took the 2012 contest 38-21. Bulldog’s quarterback Dustin Stenta is on pace to set school records Saturday in career passing yards and career passing TDs.  Stenta needs to limit the INTs, as he was picked three times in the loss to SAU last week.  UAM has little to no ground game so the SWOSU defense will be looking to stop Colton Morrison’s passing. The Bulldogs will want to take advantage of a Boll Weevil defense that is giving up more than 385 yards per game.
Joey’s Pick: SWOSU 42-28
Matt’s Pick: SWOSU 28-24

Haskell (0-4) at Bacone (2-2)
After a tough loss at D-I Lamar, the Warriors are back home and winding down their non-conference schedule.  Bacone is averaging more than 400 ypg of total offense and are effective through the air (230 ypg) whether its Kyle Kuban or Karl Birkenfield throwing the ball.  David Chapman has caught five touchdown passes and been named CSFL Player of the Week twice this season.  The Indians have given up only one sack in four games, but are scoring under 13 points each night.
Joey’s Pick: BC 34-17
Matt’s Pick: BC 28-7

Langston (0-3) at Northwestern State (2-2)
For the fourth and final time this season, the Lions will take their show on the road and at the home of a D-I opponent.  The record hasn’t shown success, but the experience is building toward making a strong showing in the CSFL.  Northwestern State has been on the road often this season as well as this is just the second home game in five contests this season.  The Demons are 31-1 against non-D-I opponents at Turpin Stadium, which opened in 1977.  Kievon Jackson is leading the way on the ground for the Lions and is looking to break out soon.
Joey’s Pick: NSULA 56-14
Matt’s Pick: NSULA 48-21

Oklahoma Baptist (0-3) at Houston Baptist (1-1)
Both programs are first-year programs.  The Bison are on the road for the second consecutive weekend.  HBU is coming off a win over second-year program Wayland Baptist and put up 52 points in the win.  The Huskies amassed more than 300 yards through air and on the ground.  OBU had two players receive CSFL weekly honors following the contest at Fort Lewis in Nick Shegog on defense and punter Cooper Koons for special teams.  The Bison need to put together four quarters of solid play to stay with HBU.
Joey’s Pick: HBU 41-17
Matt’s Pick: HBU 24-10