RiverHawks take two from archrival Bronchos on the road 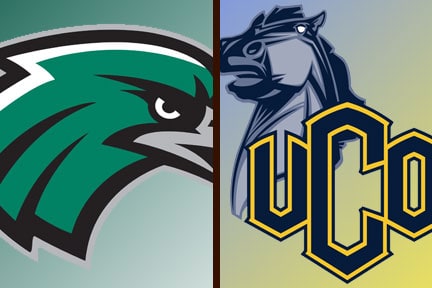 Senior forward Sarah Green converted a layup with 40 seconds left, but a three from Chelsi Dennis with just 17 seconds to play gave the home side its first lead of the game at 53-52.

NSU coach Randy Gipson called a timeout to calm his team down, and the RiverHawks looked the part in the final ticks off the clock.

After the team broke the press and set up the offense, Lewis collected the ball on the right wing and proceeded to dribble through the top of the post on the left side.

Lewis was being heavily guarded, but a well-timed pump fake forced her defender to jump early. She was able to rise above and get off a clean shot, and the ball bounced on the rim and went down as NSU regained the lead with 2.8 seconds left to play.

Central Oklahoma was unable to attempt a clean look as Northeastern State thwarted the comeback.

Lewis finished the contest with a game-high 19 points on an efficient 7-for-13 shooting. She was also 5-for-10 from distance. Sophomore guard Chelsey Stricklen tied her career high with 13 points on 4-of-7 shooting. Fellow sophomore guard Fontana Tate scored six points and pulled down a career-high 11 rebounds.

The Bronchos were led in scoring by Rachel New’s 13 off the bench. Whitney Dunn added 12 and Alyssa Fuxa contributed 10.

Senior forward Jermaine Bransford paced NSU with 22 points and nine rebounds, while playing all 40 minutes. He was 8-for-10 from the field and 6 of 7 at the free-throw line.

The Bronchos were led by Josh Gibbs, who scored 18 points. Spencer Smith contributed 12 and Christian Huffman came off the bench to add 11.

The RiverHawks outrebounded their opponents 30-23, and both teams recorded 11 turnovers and nine assists.

Northeastern State is set to return to the friendly confines of Jack Dobbins Field House at 3:30 p.m. Jan. 19, when the team plays host to No. 10 Washburn.