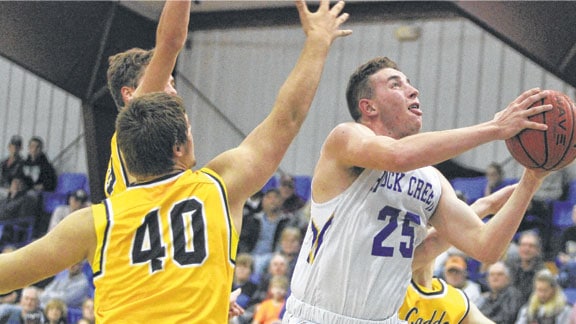 BOKCHITO – Each game had a different feel, but each was exciting and each had the same end result. A Rock Creek victory.

Rock Creek senior Michaela Stinson rolled her ankle with less than a minute remaining in the contest and was somewhat hobbled for the final play. Fortunately for her, she didn’t have to move much to do her part.

With the game tied at 51-apiece, the Lady Mustangs (10-2) had the ball to run one final play in regulation. They ran a play at the top of the key and then Jordan Nelson found an open Stinson behind the arc on the right side, who drained a three-pointer with five seconds left to put her team on top for good.

Stinson had a game-high 25 points on the night.

The game went back and forth all evening, but neither team could take advantage of small leads and break away. It really came down to which team had the ball last, and on Friday night that was Rock Creek.

The Lady Mustangs extend their winning streak to six.

Davis Rogers had a huge part of his team’s 23-point third quarter and helped Rock Creek pull away from Caddo in the period.

The senior drained three treys in three shots in the third and the Mustangs built a 12-point advantage going into the fourth and held the Bruins at bay for the win. Rock Creek came out of the intermission and outscored Caddo 23-11 in the quarter to break away from the 30-30 tie at the half.

Rogers had 14 points in the game. Fellow senior Shacona Vandenberg led the way for the Mustangs with a game-high 23, scoring in all four quarters and was a big presence on defense as well.

The turning point in the game came just before the half. Trailing 30-28 with 1.4 seconds left in the second quarter, RC junior Sam Roper missed the second of two free throws, but chased the rebound and tipped it to teammate Karson Dry, who quickly put it in for the score as the buzzer sounded. Rock Creek carried that momentum through the break and into the second half.

Rock Creek’s boys’ team also take a six-game winning streak into Christmas Break. Head coach Rob Frederick said his is proud of the way his team has played in the first semester.

“They have done a great job and worked really hard,” Frederick said. “They’ve played well against a lot of tough teams, like tonight as Caddo is one of those tough teams.

“We’ll see how it goes. We need to play well after Christmas and we come right back with the Kingston New Year’s Classic and there are a lot of really good teams in that, too.”