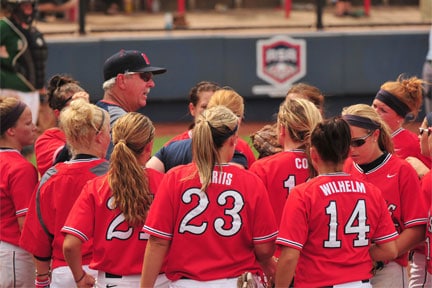 “This group is by far the most athletic group we’ve ever had and we’ve had some good groups,” Dicus explained of this year’s squad. “Not to put too much pressure on them but not only are we talented but we’ve got great depth.”

The self-proclaimed “Fab Five” returns for their fourth season on the Hill. The first recruiting class signed by Dicus in 2009 has won 105 games over the past three seasons.

Dicus discussed the “Fab Five,” “I can’t say enough about them as young people. They’re going to graduate, they’re going to be Hillcats true and true.”

Consisting of Ashlie Fauchier, Katrina Loy, Linsey Curtis, Ashley Dillman and Shelby Brogdon the “Fab Five” looks to leave their mark on the program in their final season.

“We thought we’d get the job done a lot quicker and we haven’t,” declared Dicus. “It’s a special group because not only are they good softball players, they’re super people. They’re people you want to be around.”

Returning for her fourth season at shortstop is Ashlie Fauchier, a three-time All-Sooner Athletic Conference selection. Last season she started all 59 games for the Hillcats, finishing top three on the team in 11 offensive statistical categories.

It’s on the defensive end that Fauchier draws the praise of her head coach. “Fauchier is probably the best defensive player in our conference bar none. She is a highlight reel waiting to happen,” said Dicus.

The stats back up the Hillcat head coach’s praise of his senior shortstop as she finished last season with a .972 fielding percentage where she earned a SAC Gold Glove.

At third base Shona Guerrero returns for her second season at the hot corner for the Hillcats.

With a .909 fielding percentage from the hot corner, Guerrero has a quick, accurate arm and good glove according to Dicus.

Backing up Guerrero will be Linsey Curtis a hard worker that brings power to the plate and is well known in the conference and the nation for her prolific home run hitting.

At second the Cats will look to Iowa Western Community College transfer Cailin Simpson to step into a starting role. A slick defender that batted .344 with 74 hits and 55 RBI a season ago in the NJCAA ranks, Simpson will be backed up by Megan Williams.

Williams served as the Hillcats second baseman for most of last season but will look to add depth in the middle infield in 2013. Sophomore Tory Fitch can play both second and shortstop. Dicus likes the effort that Fitch continues to put in to get better.

Returning two-year starter Taran Threet and junior college transfer Toni Shurtliff will vie for the starting spot at first base. Threet started all 59 games for RSU in 2012 and batted .289 in 180 at-bats. Shurtliff joins the Hillcats from Northern Oklahoma College-Tonkawa where she batted .333 with 56 hits and 32 RBI as a sophomore last year. Dicus expects for both to see a lot of time on the right side of the infield.

After missing all of her junior season due to injury Shelby Brogdon returns for the Cats in 2013. Brogdon could see time at first base but is most dangerous at the plate with 20 homeruns in just two seasons and a slugging percentage of .586.

“Brogdon can go in and play first base and be the designated player some,” Dicus said. “She’s a great clutch hitter and someone that you can bring off the bench and she’ll deliver.”

The lone freshman in the cast of Hillcat newcomers, Erin Patrick, is a hard worker that could see time at first base.

Depth in the infield and throughout the team has the Hillcat head coach most excited about the upcoming year.

“That’s probably the biggest thing about our team now. We’ve always had a good softball team but we’ve never had near the depth we have now,” Dicus discussed. “We’ve seen it spike in intra-squad scrimmages and kids are actually pushing each other.”

A season ago Laura Fleck was forced to be the Hillcats everyday pitcher as she won 28 games in her 54 appearances in the circle. The southpaw pitched in 292.2 innings in her first year in a RSU uniform out of Muskogee (Okla.) High School.

This year Fleck will share time with Yolanda Rios a junior transfer from Midland Junior College. Rios recorded a 25-8 record as a sophomore with nine saves with a 2.77 ERA. In 225.1 innings pitched last year she struck out 202 batters. A right handed pitcher, Rios was effective as a freshman at Midland finishing with a 22-4 record with six saves and a 2.26 ERA in 180 innings.

Dicus explained what Rios brings to the circle, “We look for great things from her and can be a difference maker in the circle. She’s got great control and a variety of pitches that will compliment her arsenal all the way through.”

Another addition comes in the form of new pitching coach Andrea Vaughn. Most recently the head coach at Oologah High School, Vaughn has done things to improve the pitchers in a few weeks that are evident to the Hillcats head coach. Dicus is excited to see what the guidance of Vaughn along with the mixture of pitching styles will do for RSU.

Linsey Curtis adds another option inside the circle as she continues to improve every day. Dicus likes the drop ball that Curtis possesses in her repertoire and believes the senior will be an inning eater.

After starting 58 of the Hillcats 59 games at catcher a season ago Niki Keck returns for her senior season in 2013. Despite being the incumbent Keck isn’t necessarily guaranteed the job in 2013.

Odessa College transfer Desireé Ayarzagoitia made a push in the fall for the starting job. After batting .389 with 65 hits, 18 doubles, eight home runs and 47 RBI as a sophomore a season ago in the NJCAA.

“She’s probably better on the offensive end, yet Keck has good knowledge and understanding of what we’re trying to do. How they blend together will be interesting,” discussed Dicus of the catchers.

A third player, Jamie King, could be put in the mix behind the plate due to her ability offensively.

“King is a mult-faceted player that can play in the outfield and catch,” said Dicus. “We’re trying to figure out how to keep her bat in the line-up, keep Desireeé’s bat in the line-up and Keck, a kid that played every game for us last year.”

“Loy swings a big bat and will probably be our clean-up hitter to start off when we open the season. She’s a solid defender in leftfield and knows where the ball is supposed to go,” the Hillcats skipper said.

A Claremore, Okla. native, Loy started all 59 games in left field last season and was second on the team in home runs with seven. She was named a Captial One CoSIDA Academic All-American as a junior.

“Flores give a little more range defensively as she can cover gap to line and run balls down,” explained Dicus of the Odessa College transfer. “She gives us a lot of depth in the outfield and automatically we become more athletic.”

Candace Monigold will take over centerfield duties after a two-year career at Northeastern Oklahoma A&M in Miami, Okla.

Dicus praised his addition in centerfield, “She’s a smooth operator out there and covers gap-to-gap well. Monigold has great hands, great range, takes great angles and does it effortlessly. She looks like she’s been out there her whole life.”

Northern Oklahoma College –Tonkawa transfer Katie Ellington could round out the line-up for the Hillcats in right field.

The Hillcat head coach explained the Bishop Kelley product, “Ellington is a JUCO transfer that is super-fast with a powerful arm, powerful bat. She’s very athletic covering line to gap and a lot of ground. She’ll be a surprise on the offensive end with the numbers she can put up.”

King brings good range, gap-to-gap and could be a lead-off hitter playing a lot in right field, sometime at catcher and designated player.

Ashlee Dillman can play all three of the outfield spots and is a valued piece to the coaching staff due to her versatility. Her awareness on the base paths and experience has Dicus believing she could have a great senior season.

“We never back away from anyone and we always build a strong schedule,” explained Dicus of his scheduling philosophy. “We build a tough schedule to prepare us for postseason play. To prepare us for the SAC tournament and to try and get a national tournament bid. That’s possible because the SAC comes with such a great reputation nationally.”

“We go to three tournaments early. At Friends we’ll play some ranked teams, McPherson we’ll play one or two nationally ranked teams in pool play and then at Evangel that might be the toughest of the three,” said Dicus.

March 29th the Hillcats travel to preseason No. 2-ranked Lubbock Christian for four games in two days. Preseason No. 16 St. Gregory’s comes to Claremore on April 6 while preseason No. 4 Oklahoma City closes out the Softball Cats regular season with games on April 23rd in Claremore and a road trip on April 27th.

“This is a year we can battle evenly throughout that field. Then throw in Oklahoma Baptist which has a great team and good coach. Mid-America Christian is picked last in the conference but in this conference last is still pretty good. Their coach is there for his second season, he’s a hall of fame coach and he’ll upgrade that program so the SAC in itself will be a battle every day.”

Despite a tough conference slate and a non-conference schedule packed with quality opponents. Dicus believes the experience will prove the Hillcat battle tested especially with a strong group of upperclassmen on the roster.

“The schedule is probably tougher than any schedule we’ve ever had. But this group of seniors collectively has done a pretty good job and compiled a lot of wins and not a lot could do that.”