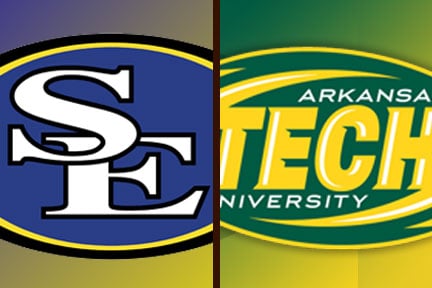 RUSSELLVILLE, Ark. – Southeastern was unable to overcome an early 23 point deficit and dropped its third-straight game, falling at Arkansas Tech 57-37 on Saturday afternoon in Russellville, Ark.

The loss drops the Savage Storm to 3-5 on the year overall and in Great American Conference play heading into an Oct. 31 home matchup with Southern Arkansas at 2 p.m. at Paul Laird Field.

Despite the first-half deficit, SE twice cut the ATU lead to 13 points in the second half.

The last of those came on a three-yard Ronnie Green touchdown with 12:03 to go in the game, but after forcing the Wonder Boys to punt SE was forced to punt on its next possession as well.

But the Storm would once again hold and get the ball back at the ATU 43 yard line with 5:50 to play and still needing two scores, but a fumble would bring the rally hopes to an end as Arkansas Tech would recover and score on its next drive to fashion the final of 57-37.

SE’s offense was held to its second lowest output on the season at 344 yards, with Ryan Polite driving the bulk of that with a 26-of-45 passing effort for 239 yards and a pair of touchdowns.

The rushing game did crack the 100-yard mark, led by Kieron Hardrick who carried 13 times for 73 yards in his first action of the season.

Green had 58 yards on 11 carries and scored twice.

Bryce Steele was the leading receiver on the day with a game-high 82 yards on eight catches with one touchdown.

Franky Okafor and Kaymon Farmer each added five catches, with Okafor’s going for 61 yards, while Hardrick had two catches for seven yards, but one was for a touchdown.

Defensively, Kevin Jones had a team-best 13 tackles, while Thomas Curry added 12 in his return to the lineup.

Raheem Wilson snagged his fourth pick of the season and returned it 64 yards for a touchdown, his second pick-six of the year.

Sione Taufahema finished with eight tackles, but picked up 1.5 sacks on the day and two total tackles for loss.

Unfortunately, in a battle of the league’s top two ranked defenses the Storm allowed 567 yards of total offense, including 388 yards rushing.

ATU opened scoring in the contest, taking advantage of a mishandled punt after its opening drive stalled, the Wonder Boys took over on the Southeastern 16 yard line and four plays later took a 7-0 lead.

The Storm answered on its ensuing drive, going 82 yards on seven plays with Polite finding Steele for a nine yard score, however the PAT was blocked and then returned by ATU’s Cua’ Rose for a defensive PAY to give the Wonder Boys a 9-6 lead.

They would add to it after their next possession went 64 yards in 11 plays to open up a 16-6 lead.

After the Storm were forced to punt, ATU would add one more score in the first quarter on a 56 yard TD pass by Arsenio Favors to Chris Eastburn to take a 23-6 lead after one quarter.

After a Polite interception to end the first quarter, the Wonder Boys would drive 91 yards for a score, but a missed PAT would leave the Score 29-6 with 13:29 to go in the first half.

The Storm finally found an answer on the ensuing drive, marching 71 yards on nine plays capped by a Green 23 yard run to make the score 29-13.

Five plays into the next ATU drive, Wilson would pick off a Favors pass and return it 64 yards for a touchdown and close the gap to 29-20.

That was as close as the game would get however, as Arkansas Tech would score on its next drive and then take advantage of an SE three-and-out, adding another touchdown to open up a 43-20 lead which would be the score at halftime.

Joel Carlos would connect on a 31 yard field goal to cap the Storm’s opening drive of the second half to close to 43-23.

After forcing a punt, Southeastern would take its next possession 47 yards in nine plays with Polite finding Hardrick for three yards and a touchdown to make the score 43-30 with 5:33 to play in the third quarter.

However, ATU would answer with a nine play, 73 yard scoring drive to take a 50-30 lead which would be the deficit heading into the fourth quarter.

Southeastern would cap a 13-play, 73 yard drive that started in the third quarter with a three yard Green touchdown run and close to within 50-37 with 12:03 to play.

Despite holding the Wonder Boys on their next two drives, SE was forced to punt before turning the ball over with 5:06 to play, ending the Storm rally hopes.