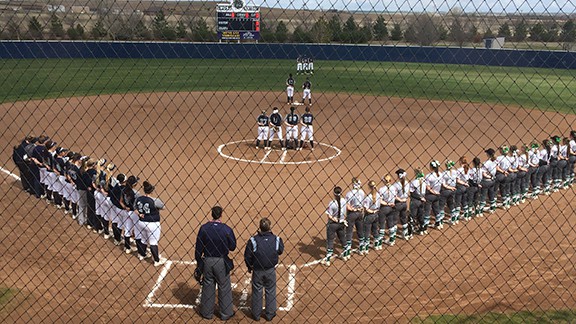 Spring Break: the week you look forward too from the moment you return to school after Christmas. It’s a week without classes usually highlighted by road trips, warm weather and good times. There’s nothing quite like Spring Break during those college years.

For myself, however, I always judge my Spring Break based on which week of the NCAA Tournament it was during. Many years, it was the first round of the dance, which meant my Thursday-through-Sunday of Spring Break were spent camped around a television watching basketball for hours. Other years, it would be the second weekend and it seemed like it took forever for the Sweet 16 and Elite 8 to come back around after the opening weekend. Then there was the one year that USD 338 didn’t offer a Spring Break and I’m still not over it.

It is this dedication to March Madness that has served me well in the early stages of a career in the Sports Information business. In my final three years of college (undergrad and grad school), my Spring Breaks were normally spent covering baseball or softball games, a trend that has continued in my now fourth year in the profession full time.

You see collegiate baseball season in essence begins at the conclusion of winter break. Teams have less than a month of practice in January before returning to hit the field of competition just in time for the Super Bowl, but that’s a blog for another day. By mid-March, we find ourselves right in the heart of the conference baseball and softball season, something the teams have already been focused on for more than a month. I know it seemed crazy to me when I began working in this profession, but in order to get the regular season and conference tournament played before graduation, it’s a must.

There will be plenty more baseball and softball to be talked about in the coming weeks and months, but for now let’s take a look at the Madness that is coming. Two NCAA Division I teams from Oklahoma have advanced to the Big Dance, with the Sooners staying home to play at the Chesapeake Arena while Tulsa heads to Dayton for a First Four matchup with Michigan on Wednesday.

Also on Wednesday, the NAIA National Tournament’s begin and the state is well represented with five teams playing: Langston, Mid-America Christian and Oklahoma City men; Langston and Oklahoma City women. At the NCCAA level, the Oklahoma Baptist women face Point College in the national tournament on Wednesday, while Hillsdale’s men’s basketball is celebrating their third national championship after defeating Grace Bible College over the weekend.

Good luck to those teams still competing and congratulations to those who have already concluded their seasons, like the OSSAA State Championship teams who hoisted the gold ball last week. A list of those can be found below. On a side note, I also would like to say congratulations to the Valley Falls HS girls basketball team on a third-place finish at the Class 2A level in Kansas.

Until next time, enjoy the remainder of your Spring Break!