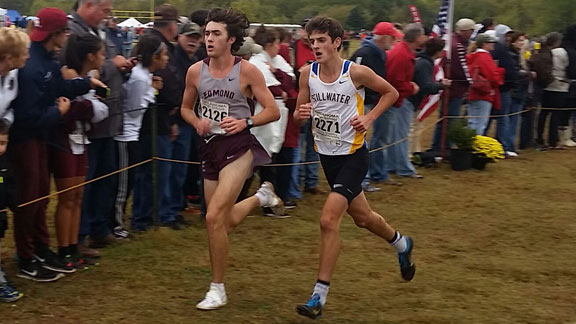 EDMOND – Vlad Munteanu has joined the ranks of the elite.

Munteanu, a sophomore, earned cross-country All-State honors for the first time at the Class 6A State Championship meet at Edmond Sante Fe High School on Saturday.

To receive All-State honors, runners must finish in the top 15 at the state meet.

“It feels amazing,” Munteanu said. “As a sophomore, I mean I’m pretty excited about that. I can’t wait to get my medal.”

When the start gun sounded, Munteanu immediately looked for Beyer. Although he didn’t know where Beyer started from, Munteanu knew where he could find him; in the front.

He had about 300 meters to find Beyer before the course began to narrow, so to avoid the risk of losing sight of him among the cluster of runners, Munteanu sprinted out to an early lead. Beyer followed him.

“We told him he’s going to mark the state champion, Beyer from Norman North,” Crynes said. “Not everybody has that ability, but [Munteanu] can start fast, settle in, recover and hold that fast pace.”

Munteanu knew he had to keep up with the leading group, and that is what he did. He reached the 1-mile mark at 5:00 in fifth place, a few strides behind Beyer. 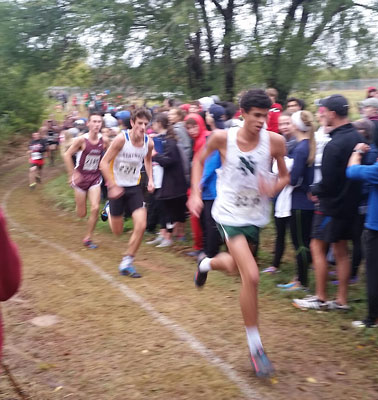 However, for the third straight race, Beyer pulled away from Munteanu at the 2-mile mark. Now in sixth place and realizing he couldn’t catch with Beyer, Munteanu shifted his focus to the runner closest to him, Edmond Memorial sophomore Zach Mauck.

“I kept up with [Mauck] for the last lap, and I took off from him with right about 200 [meters] left,” Munteanu said. “I kept looking back to see if he was going fight me for fifth place, but I didn’t let him, so that’s good.”

Although he did not run a personal best for the fourth straight meet, Munteanu said he is satisfied with his performance.

“I’m not disappointed at all,” Munteanu said. “We knew it was going to be harder and tougher and slower because the course is a little harder. There was a few hills, one that you had to do twice, and a lot of mud. That’s a big factor in it because you don’t want to slip and drop and have to get up and run again.”

“A lot of emotion,” Ogle said. “I tried my very best to keep that under control, but it kind of got to me, and I think that might be a little bit why it psyched me out.”

He said he started the way he wanted, but the narrow trails affected his strategy, causing him to constantly change his pace.

“Any movement forward is really hard,” Ogle said. “That was the pretty much the theme of the race. I would get caught in a box, and then if I broke free, I’d speed up to where my pace should have been. It was slow-fast-slow-fast rather than a steady pace, which was kind of tough to do.”

Although he is glad he had the opportunity to end his cross-country career at the state meet, Ogle said he has mixed feelings about the season coming to an end.

“It sucks that that’s the end of that competitive fire, at least for the cross-country season,” Ogle said. “It was nice to end it with the best team I’ve ever ran with.”

Crynes said the leadership Ogle displayed will be missed next cross-country season, but he knows Ogle will come ready to work in the spring for track.

“Jay just gave us tremendous leadership all year long; he put enthusiasm into our team,” Crynes said. “It’s just tough seeing a senior do his last competitive race, but he’s hungry and he knows what he can do. He’s going to target that mile and 2 mile in the spring.”