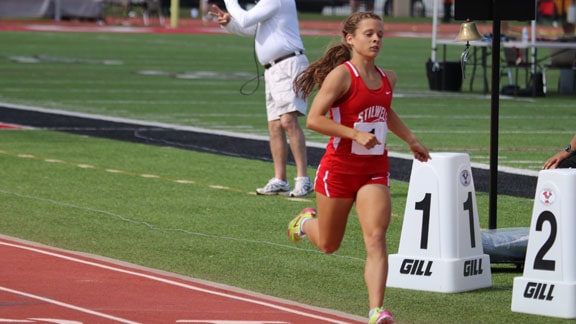 Sydney Lawrence had run with pain before, but she had made it through. And had won.

The 5A state track championships were supposed to be no different.

The senior from Stilwell is no stranger to winning distance titles. As a freshman, she took both the 1,600 and 3,200 at state. She collected state titles in cross country in both her sophomore year, and earlier this year as a senior.

For Lawrence to come away with one, two or possibly even three first-place finishes was very likely in her final high school meet. A gifted athlete, she also recognizes that running is a big part of how she grows in and even displays her faith.

“I actually feel like running draws me closer to God,” Lawrence said. “On race day, I usually take my Bible with me and read on the way to the meet or when I get there and then pretty much through the day just trying to get my mind right and to get the strength I need.

Lawrence had been experiencing pain in her right knee since the start of May.

“I was having trouble with my knee a couple of weeks before state, about a week before regionals,” Lawrence said. “I was trying to not do anything to make it worse. I was really scared because I got within a few days of regionals and it had gotten worse and I was limping a lot and I thought I might not make it to regionals.”

She said she didn’t like the thought of resting her knee with races approaching as her coach Greg Walker had encouraged her to do, but she did it. And Walker’s advice proved to be good as she took the regional title.

With care during the week between regional and state, Lawrence prepared herself and felt good about how things were going.

“I kept trying to monitor my knee and training for the next few days. And then I got to state and I was confident, which generally doesn’t happen for me.”

She graduated from Stilwell High School on Thursday, May 14, and then hit the road to make it to the state competition the next day.

All eyes were on her during the 3,200, her first run of the weekend, but this race would end in a way no one expected.

“I got started, and I noticed right off the bat that I had a little bit of pain in my knee that I didn’t have before. And I was like, ‘That’s unfortunate. Maybe it won’t get worse.’ So I kept going and it kind of stayed the same.

“And when I got to my fifth lap, it got a little bit worse. And I thought I just have to make it through three more laps. ‘Don’t freak out. Don’t start panicking.’ And when I came around on my sixth lap, I kept looking at the screen because I felt like I was limping. I was trying not to, but it was almost like it was obvious.”

“I kept looking at that screen that was showing all those runners. I came around and was about to finish that sixth lap, I had about 100 yards to finish that lap, and my knee buckled out.

Lawrence had built a lead on the field, but with pain now a major issue, the thoughts came fast and furious in her head.

“I would take a step and it would buckle and I took another step and it buckled out. I was like, ‘This hurts so bad. And if I keep running with this, I’m really going to damage something. And I’m probably going to end up walking before it was over, because it’s so painful. I’ve got two laps left…’ 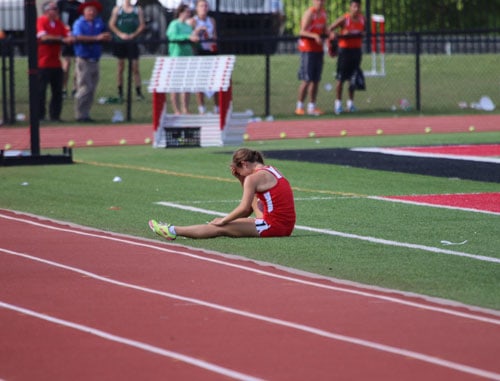 Lawrence sat in emotional and physical pain after she stepped off the track at the 5A State Teack Meet in the 3,200 meter run. Photo by Lisa Geissler.

“And I was contemplating and it felt like I had contemplated forever about it, but it was only about two seconds and I had it all figured out. My right leg was just going to buckle.

Lawrence made a decision in the best interest of the future of her running career, but with it came the agony of the moment.

“It was all pain, but it was also that feeling of shame. Like I just stepped off the track and it was all over. It was really hard for me to deal with because I was winning by a lot, and I had races tomorrow, and I don’t know what to do.

“But I stepped away and thought that’s not what He did. He didn’t fail me, because He doesn’t fail.”

It’s been nearly two weeks since the meet and Lawrence is recovering both mentally and physically.

She said the diagnosis is a buildup of calcium and tears on her tendon.

But because there was no tear, she was told no surgery was needed. And now she is resting.

“I’ve been on crutches. I’m working my way off them. I’m going to be off it for two weeks.”

The emotional toll for the OSSAA All-Stater and FCA All-Stater has been a little more difficult to assess. But Lawrence said she is working on looking ahead instead of behind.

“It was really hard, because not only did I lose that chance, but I felt like I let a lot of people down that expected me to come in and really represent my school and everything. Yeah, it was really hard to deal with.

“But I feel like I’ve made leaps and bounds of recovery from that day, when I thought I’m never going to get over this. Now I look back on that and I think, ‘State Finals? Don’t really matter anymore. You’re going off to college.”

And that college is Oklahoma Baptist University. Lawrence is receiving a scholarship to run with the Bison track program. She had looked at close-by Arkansas and had been recruited by other schools, but chose Oklahoma Baptist because of the Christian environment she experienced when she visited the campus.

Lawrence said her soon-to-be coach (OBU’s Ford Mastin) is aware of the injury and has been keeping up with her throughout the spring.

“My coach at OBU was there. I texted him when my knee started hurting and told him about it. He stayed in touch with one of the trainers trying to keep information.

“He said to make sure I don’t overdo it. I kept up with him. And he comforted me.

“After state, I had a couple of teammates that are already at OBU who texted me and let me know its OK and it’s not as important as you think it is now. College is coming and there’s so much to do in college. And they comforted me in that.”

Lawrence’s next race will be on the college level and she said she will be ready.

“I’m doing a lot better now than I expected. Mentally and emotionally I’m not quite completely over it, but I can look back on that day now without bawling me eyes out.

“And I know God is taking care of me.”