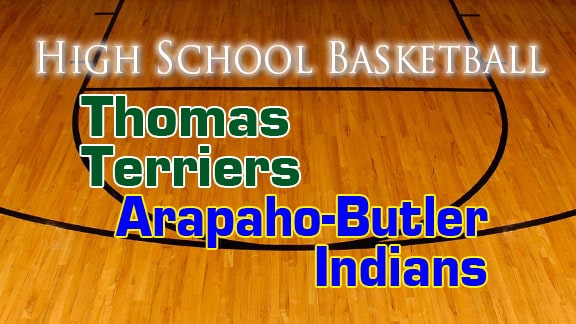 A buzzer-beating layup by Arapaho-Butler senior Braden Terrell ensured that the Indians would emerge victorious against the Thomas Terriers 46-44 in a hotly contested West Central Basketball Tournament final in front of a raucous crowd in the Pioneer Cellular Event Center.

Arapaho struck first to start the game, but the Terriers quickly responded. Led by Chezden Nease, Thomas ripped off a quick 8-0 run to take the lead. Tucker Powell supplied Arapaho’s response pouring in six points in the quarter, while Corbin Grybowski hit Arapaho’s only trey of the game to keep the Indians within striking distance. The quarter ended with the Terriers holding a 15-11 advantage.

The Indians slowly and methodically worked their way back into the game. They dominated the paint, laying in five baskets as they got to the charity stripe five times as well. Terrell did most of the damage for Arapaho with five points in the quarter.

Thomas fired back with baskets from several players, with Blake Wohl knocking down a shot from long range. Arapaho retook the lead for the first time since up 2-0 with 1:30 left in the half and went into the locker room at halftime nursing a tenuous 28-25 lead.

Both teams went cold once play resumed, scoring just four field goals combined and two apiece. However, Trent Dunaway found his range and put up five points to help the Terriers outscore the Indians 8-5 in the frame. The two sides went into the fourth quarter tied 33-33, setting up what was sure to be a dramatic finish.

The fourth quarter was an up-and-down battle for supremacy that featured four lead changes. With just over two minutes of play left in regulation, Arapaho had the ball and employed some slick passing around the perimeter that ultimately led to nothing and forced head coach Jeff Carlisle to burn a timeout to come up with a game-winning play.

The in-bound pass was perfect, but the shot was stuffed by Noah Gregory who had been clogging the Indians’ lanes all night long. A mad scramble for the ball resulted from the blocked shot, with it ultimately going out of bounds off Thomas with 11.4 seconds left, much to half the crowds’ displeasure. Arapaho then in-bounded the ball again and took a shot with four seconds left which rimmed out.

Terrell did well to grab the offensive board and quickly put up a hopeful shot at the buzzer which kissed off the glass and through the bottom of the net in front of the Arapaho student section. When the ball went through, the Arapaho fans brought down the house as Terrell was rushed by his teammates from the bench. He finished with a game-high 14 points, including eight in the final quarter.

Aside from Terrell’s 14 points, Adam Mitchell finished in double digits with ten points. Thomas had three players finish in double figures with Dunaway leading the way with 13 points. Wohl finished with 11 points and Nease had ten as well for the Terriers.