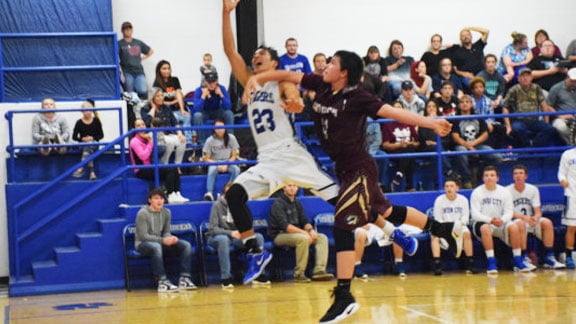 Union City looked to close out the week on a positive note and even their conference record up at 1-1 after falling to Lookeba-Sickles.

The Tigers ran away from Binger-Oney in the second half and took the win, 61-48.

The first quarter was a close one with Landon Le scoring four points in the quarter and a big three from Jason Schieber. The guys were working hard on defense making every bucket a tough one for Binger. Union City led 14-13 at the end of one.

Landon Le came out strong in the second quarter dropping six more points. Some young Tigers off the bench had to come in to help with some early foul trouble by the first five. The Bobcats were held to to 13 points again in the second but Union City only scored eleven giving Binger-Oney the 26-25 lead going into halftime.

Three-pointers were the key to the Tigers offense in the third quarter with three of them in the quarter making it a high scoring quarter for the boys. Freshman Nando Pizano came up with two timely threes helping the Tigers reclaim the lead going into the fourth.

Josh Michalicka found his stroke hitting two threes in the quarter and another big three from Nando Pizano putting the game away for the Tigers. Michalicka scored 15 points all from beyond the arc to lead the team.

“I felt like we started off a little rough but the second half really showed me some good potential for the rest of the season,” senior Cash Everett said.

This story was originally posted on gouctigers.com and was republished with permission.