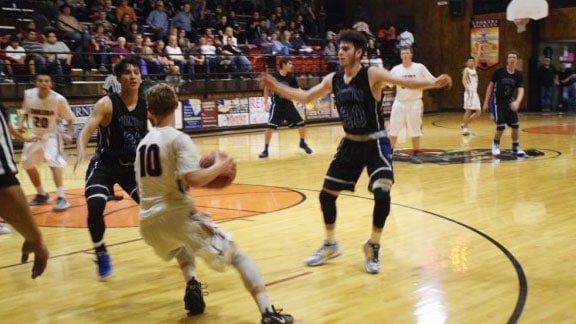 Union City traveled to Lookeba-Sickles for its first game of the 2016-2017 season on Friday, looking to repeat last year’s season-opening win over the Panthers. The Tigers came up short, 55-43, to fall to 0-1 on the new year.

The Tigers had a tough time controlling the ball in the first quarter with five turnovers, but good defense kept them trailing by only one point.

After the first quarter, Union City lost its grip on the Panthers allowing 20 points on defense, and scoring only four points on the other side of the court, closing the first half score with the boys down, 34-17.

After a rough two quarters on offense, the Tigers battle back in the third going on a 7-0 run in three and a half minutes. Not slowing down, Union City scored an additional 13 points cutting the deficit to 12, with seniors Cash Everett, Landon Le, and Josh Michalicka scoring 15 of the 20 points in the quarter.

With great defense in the fourth quarter, the Tigers only allowed six points, and forced the Panthers to commit seven turnovers. But that wasn’t enough, as the offense could only score six points – all off free throws.

The Tigers look to improve as they go up against Verden on Tuesday, Nov. 8.

This story was originally published on gouctigers.com and was reposted with permission.