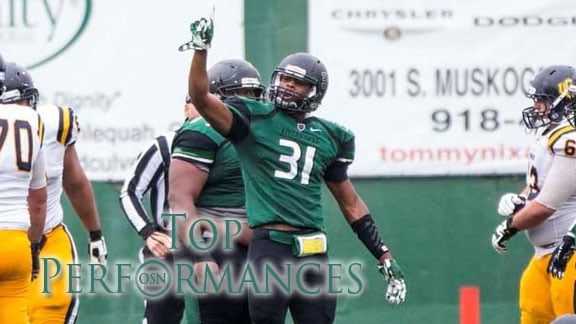 Let’s take a look at the top 10 performances and performers in college football for the month of October.

No. 10 –  Blake Pearce, freshman, Bacone
Pearce was instrumental in helping the Warrior to their second win of the season, scoring 13 points in the 37-30 victory over SAGU. He was perfect on PATs (4-4) and connected on three of four field goal attempts from 29, 32, and 55 yards.

No. 9 – Horatio Smith, freshman, Northwestern
Smith helped the Rangers take care of business early against Southern Nazarene. He tied a school record for receiving touchdowns in a game with four, and broke another record – receiving TDs in a half – as he collected them all in the first half. Smith had eight receptions on the day for 194 yards with a long of 61 yards, which went for a score, and NWOSU won 49-20.

No. 8 – Southeastern’s defense
The No. 8 spot goes to the entire SE defensive unit and revolves around the number eight. The defense was called on to make eight points stand in a game in which neither side scored a touchdown. The Storm shut out Southwestern and even recorded a safety in the 8-0 win. Southeastern also logged eight sacks against Southern Arkansas, a number that is good in itself, but also matched the eight sacks that SAU had given up combined in the previous eight games this year.

7. James Washington, sophomore, Oklahoma State
Washington had two touchdowns on the afternoon against Texas Tech and they came at big moments. His first, a 75-yard reception for a score started to open things up (56-45 in the fourth quarter) for the Cowboys, who had been in a dogfight all day. The second came later in the fourth, a score from 73 yards out, that would give OSU the insurance points it needed. Washington had four catches for 200 yards, the first Cowboy receiver to have 200 receiving yards since 2011.

6. Jacob Ellis, senior, Oklahoma Baptist
Ellis had his best game of his career in his hometown of Alva, as the OBU rallied to defeat Northwestern, 41-38. The Bison trailed by 24 early in the contest, but the defense grabbed five interceptions to aid the comeback. Ellis did his biggest damage in the third quarter, getting OBU back to within three points on touchdown runs of 81 and 26 yards. The senior rushed for 211 yards on 25 carries on the day and all of that came in the second half.

5. Joby Saint Fleur, junior, Northwestern
The senior had a big day on homecoming and helped stop Southeastern’s three-game winning streak by stopping the Storm quarterback. Northwestern went up early and Saint Fleur made it stand with seven tackles – five for loss – and four sacks by himself. He also forced a fumble.

4. Keyarris Garrett, senior, Tulsa
Tulsa came up short at home to a very tough, and still undefeated Memphis team in October, but the Hurricane didn’t go down quietly. And Garrett made his mark. He had 14 receptions on the evening and racked up 268 receiving yards. Garrett also scored three times with touchdown catches of 32, 36 and 46 yards.

3. Baker Mayfield, junior, Oklahoma
Just a day at the office for Mayfield against Kansas in a 62-7 victory. But even so, he was very effective and accurate on the afternoon. Mayfield was 27-of-32 passing for 383 yards with four touchdowns and no interceptions.

2. Darian Morris, junior, Northeastern State
It’s been a big month for Morris. The defensive back had two interceptions against rival Central on the final day of October, but his performance in a win against Missouri Southern was even bigger statistically. He had nine tackles, three pass breakups, two fumble recoveries (one of which was returned 97 yards for a touchdown), one interception, one tackle for loss and one half sack. And the RiverHawks won their first two games of the season in October. It’s been a big month.

1. Clay McKenzie, sophomore, Central
And October has been even bigger for McKenzie. The sophomore, who stepped into a starting role in Week Two of the season, rushed for more than 100 yards in each of the five games played in October. The streak was capped, for the month anyway, with a performance against rival NSU in which he had 33 carries for 253 yards and three touchdowns. He also had three receptions for 28 yards. For the month, McKenzie rushed for 795 yards and eight touchdowns – and his team went 4-1.