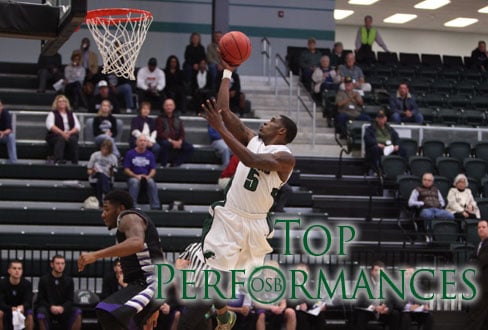 As was mentioned in the women’s list, weather forced postponements and cancelations of many games.  But there were still impressive performances in December.

No. 9 – Robinson Opoch Odong, Rogers State
Another Oklahoma team won in it’s first opportunity in a new conference.  RSU took its inaugural Heartland Conference contest, 71-64, over Newman.  His 16 points and seven boards were both game highs in the hard-fought win in Claremore.

No. 8 – Christian Smith, Bacone
The Warriors played their first two Red River Athletic Conference games – both on the road – in December and won them both.  Smith had double-doubles in both games and averaged 20.5 points and 14 rebounds in his efforts.

No. 7 – Shawn Glover, Oral Roberts
Glover led his team in scoring in each of the six games the Golden Eagles played.  (The streak reached all the way to 10, counting games in November.)  He averaged 19.8 points and 5.2 rebounds in the December, a month in which ORU was only 2-4.  Glover’s 20 points (7 of 8 from the field) and nine boards was big against Dallas Baptist as the Golden Eagles secured a 69-55 win.

No. 6 – Brandon Lucas, East Central
ECU went 4-0 in the month and that included two wins in the Great American Conference.  The Tigers took the road sweep of Arkansas Tech and Harding and Lucas put in 23 points and grabbed six boards per game.  His efforts, including shooting 68.2 percent from the floor, earned him GAC Player of the Week honors.

No. 5 – Josiah Campbell and Marty Wilkerson, St. Gregory’s
As good as the Cavs were in the non-conference part of the schedule, they needed to win games in the SAC to make the season successful.  SGU got its first league victory since February 2012 in a 97-93 win over Texas Wesleyan.  Wilkerson went for a game high 31 points, while Campbell had a solid double-double with 16 points and 13 rebounds. The two combined to shoot 15 of 18 at the free throw line.

No. 4 – Markel Brown, Oklahoma State
Brown averaged 14.8 points during December, but blew up for 23 points and 11 boards as then-No. 7 OSU beat then-No. 20 Colorado in Las Vegas.  He accounted for 37 percent of his team’s rebounds.  Brown efforts led to Big 12 Player of the Week honors.

No. 3 – Cameron Clark, Oklahoma
Clark was made all four free throw he took.  This included two with 9.7 seconds left to give OU a 91-89 win over Texas-Arlington.  The game winning points were part of a game high 31 that he scored.  Clark also had six rebounds and three steals helping his team to a 10-1 record.

No. 2 – Semar Farris, Mid-America Christian
Farris accounted for a significant amount of his team’s points in December.  He averaged 21.3 points and 6.5 assists in four games and the Evangels went 3-1 for the month.  This included two SAC victories to keep MACU at the top of the conference race in the early going.

No. 1 – Bryton Hobbs and Keon Littleton
The RiverHawks were 4-0 in December and all were MIAA victories and these two each earned Player of the Week honors from the league.  Hobbs got things started with 36- and 21-point performances in wins over Lindenwood and Lincoln, respectively.  He also added six assists per game.  Littleton followed with big games as NSU handed Missouri Western and Central Missouri each its first conference loss.  Littleton averaged 16.5 points and 7.5 boards and led his team in points, rebounds, steals and blocks while committing only one turnover during the weekend.